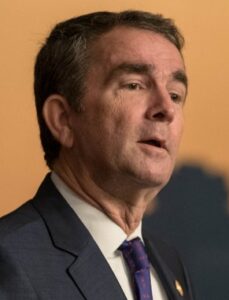 For the first time since the pandemic began, a news bulletin that Gov. Ralph Northam was holding a press conference yesterday didn’t fill me with dread.

Four days left in his term. How much damage could he do?

In the past we never knew which civil liberties would be thrown into the wood chipper by the governor who never admits he’s wrong.

Any time infections rose, we knew with certainty that Northam would flail about, instituting new rules that would have absolutely no impact on the trajectory of the virus.

Cases rose, and cases fell. It mattered little if Virginians were sitting on beaches, staying out past midnight or wearing state-mandated face diapers.

Had it not been for bold governors in places like Florida and Texas and South Dakota we might have been fooled into believing that the arbitrary rules were somehow responsible for the inevitable drop in cases.

On Monday, with four days left in his term, Northam reinstituted a 30-day state of emergency ostensibly to help ease the burden on hospitals.

Always willing to pat himself on the back, Northam used the occasion to boast about the high vaccination rate in Virginia while at the same time saying our hospitals were feeling the pressure and cases were at an all-time high.

He sees no contradiction in those statements.

Northam even repeated the party line that the vaccines are working “as they’re supposed to.”

No, they’re not. The vaccines were intended to stop the virus and end the pandemic. They were supposed to protect the vaccinated from infection and transmission.

As it is, the vaccinated and unvaccinated alike are spreading this highly contagious virus.

At best, the vaccines seem to protect the vaxxed from serious illness. Then again the virus has mutated into a much milder, less deadly disease.

This was the governor’s final press conference, and true to form, when asked what he might have done differently during the pandemic Northam shrugged and refused to admit any mistakes.

He seems to have forgotten that he was the first governor in the nation to close schools for the remainder of the 2020 school year. A colossal mistake. Worse, his rules for reopening were so onerous that most public schools stayed shuttered through the fall of 2020 and some didn’t reopen until the spring of 2021.

The damage done to kids by Ralph Northam’s policies has been immeasurable. These kids will be paying for the governor’s reckless policies for years.

As usual, the obedient Virginia press corps tossed little softballs at the governor and applause was heard as he left the room. It was unclear who was clapping.

After eight years of giving tongue baths to successive Democratic governors we’ll have to wait to see just how kind and accommodating members of the media are when a Republican is in charge.

My prediction: Watch the lapdogs turn into attack dogs with Glenn Youngkin in the Governor’s Mansion.