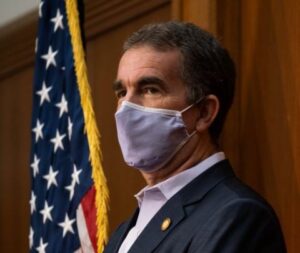 Despite a surge in the number of COVID-19 cases, hair-on-fire national media coverage, and the imposition of tighter restrictions in neighboring Maryland, North Carolina, and Washington, D.C., Governor Ralph Northam is holding steady with a relatively light regulatory regimen for Virginia. As the Virginia Mercury puts it today, “Northam is stressing messaging — not mandates — to curb rising COVID-19 infections.”

After some missteps early in the epidemic, the governor appears to have struck a reasonable balance between slowing the spread of the coronavirus and keeping the economy open. Northam is asking Virginians to exercise personal responsibility. Wash hands, wear masks, and limit gatherings.

“I’m not saying don’t celebrate Thanksgiving, but if you’re planning to gather with people outside of your household, think about ways to do it more safely,” he counseled during a news conference, his last before Thanksgiving. “Consider how the space is ventilated. Or think about ways to have gatherings outdoors — especially if the weather is like it is today.”

“I’ve said all along, this is not about carrying a stick around,” Northam said. “This is about carrots. And I really encourage Virginians to follow the guidelines — not just for themselves but for the people that are working in our hospitals. And frontline workers in our grocery stores.”

All sound advice — and practices we intend to follow in the Bacon household. Indeed, with cases surging all around, it looks like Thanksgiving will be a nuclear family affair for the Bacons  — a less fulfilling but safer experience. (I don’t call the shots. I just go along for the ride.)

A large swath of the Virginia population has a libertarian streak. People don’t like being ordered around. Sadly, for some, refusal to wear masks became a political statement, a form of defiance against truculent government authority. This reaction is unfortunate on two grounds. First, such behavior makes it easier for the virus to spread. Second, the most likely victims are the friends and families of the mask rebels themselves.

If Northam is urging people to don protective face gear but making mask-wearing voluntary, there’s not much to push back against. Now refusal to abide by basic virus-fighting protocols becomes not an act of rebellion but an act of stupidity.

Conservatives and libertarians should back Northam as long as he maintains his current posture. We believe in exercising personal responsibility. Northam needs to know he has our support as he faces inevitable pressure from those who believe that more draconian, authoritarian responses to the epidemic are called for. Let us show the world that a free people can do the right thing.

This entry was posted in Public safety & health, Regulation, Uncategorized and tagged COVID-19, James A. Bacon. Bookmark the permalink.