No, Northam Does Not Support Police Defunding 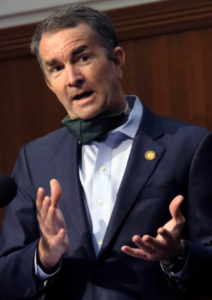 The idea of defunding the police in Virginia comes close to being clinically insane. Only someone suffering from mental psychosis would seriously propound it. Whatever police abuses may occur in Virginia — and they are relatively few — they are trivial to compared what would occur in a state of lawlessness and anarchy. So, the question arises, did Governor Ralph Northam literally call for defunding the police yesterday?

The Republican Party of Virginia blasted out a press release accusing Northam of endorsing the “Defund the Police” movement that “has become a mainstream Democrat litmus test.” The statement then cited the following quote:

I would not consider the statement a model of cogent expression of thought. But it’s clear, if not from the statement itself then from the context of what else he said, that the Governor does not support defunding in the same sense as, say, Washington state anarchists who have declared a police-free autonomous zone in downtown Seattle. Rather, the Governor supports reallocating law-enforcement dollars in support of the latest trendy Democratic Party talking point.

There are many, many reasons to be critical of Northam, and we have documented them on this blog. There is no need to make stuff up. Indeed, it is crucial not to make stuff up because you lose credibility when you do. Whatever else you may say about him, Northam is not an anarchist. (Given his embrace of emergency powers with no time limit he’s arguably closer to being a monarchist than an anarchist.) No one is going to believe he is an anarchist, and anyone trying to press the case that he is will only sideline himself from the ongoing debate.

According to the Richmond Times-Dispatch, here is what else the governor also said:

Asked specifically about whether he supports calls by protesters to “defund the police,” Northam said: “A lot of semantics has been used, and certainly one of them is dismantling the police. I certainly don’t support that. Our police officers provide a much needed resource to our communities.”

Northam added that when it comes to police funding, “we need to talk about reform and the priorities of how we spend the funding.”

Now, one can legitimately question whether Northam’s ideas for reallocating police forces have merit. He wants to see more diversity on police staffs, he says, and he supports more “co-responding” in which mental health or social services professionals accompany police responding to certain kinds of incidents. Regarding the first idea, I defy anyone to name a single metropolitan jurisdiction in Virginia that doesn’t seek more diversity in its police departments; regarding the second, sending mental health professionals to help deal with mental health sounds like an idea worth exploring.

Northam also proffered a remedy that sound a lot like an endorsement of community policing. “There are opportunities to get into the community more and make sure people in our community know police officers are there to protect them and keep them safe … and make sure they know their communities are respected.” Who can complain about this? Community policing is already commonplace in Virginia.

If Northam warrants criticism, it’s that he really has nothing new to say.

Rather than make stuff up, the Republican Party of Virginia could make a useful contribution by identifying and championing police best practices that maintain order and combat crime without alienating minority populations. Given the rabid distemper of the left-wing radicals who seem to drive Democratic Party thinking these days, we can’t rely upon Democrats to do that. The RPV has an opportunity to position itself as the voice of reason. But it will have to do better than blasting out easily refuted press releases.