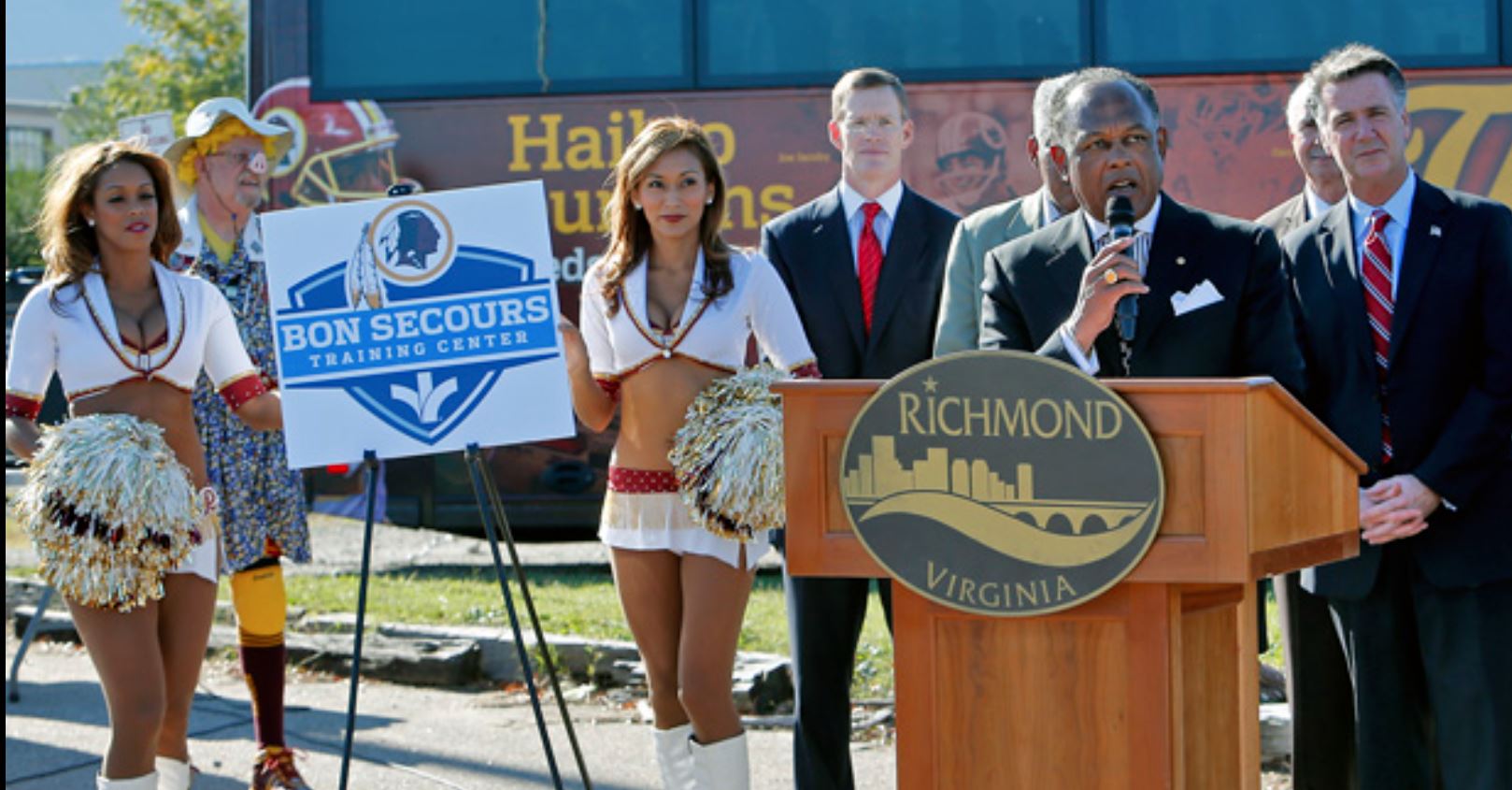 In October 2012, the City of Richmond negotiated a $40 million deal with the Washington Redskins and the Bon Secours Virginia Health System to build a Redskins training camp in the city. The complex deal had many moving parts. To make it happen, the city gave Bon Secours a long-term lease on the property of the old Westhampton School site so it could build a medical facility in the city’s prosperous West End. In exchange for favorable lease terms and the right to sponsor the training camp, the Richmond-based health system agreed to construct a medical office and fitness center in the poor, inner-city East End where it also operated the Richmond Community Hospital.

“This agreement will allow Bon Secours to significantly expand upon our effort to build healthier communities across Richmond,” CEO Peter J. Bernard said in a news release at the time.

Bon Secours did build the fitness center. But nearly a decade later, no ground has broken for the medical office.

Time is running out for the company to make good on its agreement, warn Michael Schewel, former executive vice president of Tredegar Corp., who served as Secretary of Commerce and Trade under Governor Mark Warner, and Steve Markel, chairman of the Markel Corp.

Bon Secours told Bacon’s Rebellion that it has invested millions of dollars in Church Hill and that it intends to make good on the deal. “Our health system’s leaders are committed to the construction schedule, as shared with the City and EDA, which will allow it to be built by the current deadline of December 31, 2022,” said spokesperson Emma Swan in a prepared statement.

Only time will tell if Bon Secours is able to live up to that commitment. But there is a bigger story here. What responsibility does Bon Secours — a Catholic health system whose mission statement is to “extend the compassionate ministry of Jesus … and bring good help to those in need, especially people who are poor, dying and underserved” — to make good on its values? What obligation does it have, as a nonprofit hospital chain enjoying exemption from taxation, to serve the community?

In particular, what do Bon Secours’ highly profitable Virginia operations owe the poor residents of Richmond’s Church Hill where its community hospital generated an extraordinary $73 million in operating income in 2019 — the third highest profit margin of any hospital in Virginia?

Neither Markel nor Schewel had had any formal association with  the Washington Redskins deal. But Markel, one of Richmond’s leading philanthropists has maintained an interest in Church Hill for many years; he was the major financial backer of a community grocery store that he hoped would address the issue of food deserts in the predominantly African-American neighborhood. Schewel came to the issue when serving on the board of the Better Housing Coalition, which was active in Church Hill.

“Bon Secours said they were going to do a bunch of things with us,” Schewel says. “They never did. I was unhappy with them because of their failed commitments. Steve and I started talking about how to get Bon Secours to do the right thing.” 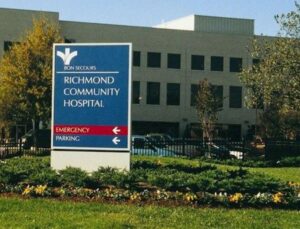 Deal timeline. I present the following account upon a time-line developed by Schewel.

The deal between Richmond, Bon Secours and the Redskins was announced Oct. 23, 2012. On July 8 the following year the Richmond EDA and Bon Secours executed a performance agreement detailing the terms of the health system’s expansions. Bon Secours agreed to the following benefits to the people living in north Church Hill:

In return, the City leased the Westhampton school property to the health system for $5,000 for an initial term, with two two-year extensions. This lease, say Markel and Schewel, was for way less than market value for a property to be redeveloped with a minimum $24 million investment.

In January 2015, Peter Bernard, who had negotiated the deal for Bon Secours, retired as CEO, but the company continued to make progress on fulfilling its promises. A March 2016 Performance Agreement Report stated that the groundbreaking ceremony for the Parseley’s Center for Healthy Communities was scheduled for April. Also, the company noted that it had acquired a parcel adjoining Richmond Community, that it had filed for rezoning, and was “moving ahead with plans for a medical office building.” Additionally, the company was collaborating on a project to build a grocery store, pharmacy, and primary care clinic in the neighborhood.

The grocery store was constructed, thanks largely to the philanthropic support of Markel and others, but Bon Secours dragged its feet on the medical-office project. In July 2018, six years after the original announcement, the company still was saying that it was “moving forward with its plans to expand its RCH campus.” That September, the company told the EDA that it has “all internal approvals with funding in place.” It also affirmed that it was planning to meet its commitment create 75 FTE jobs and $6.7 million in payroll. In November 2018, the company filed a Plan of Development for the 25,000-square feet medical office building.

But nothing happened. On Sept. 5, 2018, Bon Secours announced that it had completed a “merger” with Mercy Health, another Catholic hospital chain. But Mercy was the dominant player, and the corporate headquarters moved to Cincinnati, Ohio. There was turnover in the top spot in Richmond, and Markel and Schewel believe that the company has lost a lot of institutional memory and connection to the community since then.

“Once Mercy Health bought it, all control shifted from Richmond to Cincinnati,” says Schewel. “Basically, they don’t care. They’re not interested.”

Mercy Health remained very interested, however, in the Westhampton property and other projects in affluent sub-markets of the Richmond metropolitan area. Since the summer of 2018, the company has announced:

Meanwhile, the Westhampton School site has been substantially redeveloped through investments of tens of millions of dollars. Construction is far advanced.

Astonishing profits. Bon Secours will make millions of dollars profit on the Westhampton “sweetheart deal” lease over the course of the initial lease term, says Schewel. “The City never contemplated that Bon Secours would flip the school site to someone else and then profit handsomely from the City’s low rent deal.  The profit is even more egregious in light of Bon Secours’ failure to effect the East End Expansion.”

Now it has been nearly nine years since Bon Secours contractually obligated itself to invest in Richmond’s East End. The neglect is all the more remarkable given Richmond Community’s astonishing profitability.

Typically, inner-city hospitals have been very unprofitable, and many across the country have shut down over the years. Indeed, Bon Secours rescued Richmond Community, which was descended from the first African-American healthcare facility in Virginia and fell on hard times, in 1995. But since then Mercy and Bon Secours shuttered its DePaul hospital in inner-city Norfolk and other low-income markets, says Schewel.

Poor urban populations typically rely heavily upon Medicaid, which traditionally reimbursed has providers below their cost, and run up big bills that hospitals write off as charity care or uncompensated care. But Community Hospital was an exception in Fiscal 2019, the most recent year for which data is available through Virginia Health Information. The hospital generated net patient revenue of $203 million after deducting for charity care and bad debt and reported an operating income of $73 million. Only two other hospitals in Virginia reported higher profit margins.

“If those numbers are true,” says Schewel, “it means they are taking RCH profits and using them not to expand the campus and fulfill the obligations to the city. They’re funding expansion of the White suburban hospitals.”

“Bon Secours has always remained committed to developing the Richmond Community Hospital campus and investing in the health and community,” said the statement. “The medical office building on the RCH campus is just one way Bon Secours will develop the campus and create jobs.”

The company’s investment in the medical office building will exceed the $8.5 million in the performance agreement. The sum has been approved and “is being spent as the project is in development.”

Over and above the office building, Bon Secours has invested more than $9.8 million since 2013 on renovations and expansions at Richmond Community, and it has erected a wellness and fitness center and spent $1.6 million in partnership with the Salvation Army Boys and Girls Club to build a gymnasium. Between 2014 and 2020, the company has invested more than $12 million in community benefit dollars” to address “the social determinants of health” in the East End. That includes $780,000 invested in 36 businesses through its SEED program. In 2017 Bon Secours also opened the Sarah Garland Jones Center for Healthy Living, a $1.7 million facility dedicated to providing nutrition, health and wellness educational programming, workforce development training, and improved access to care for area residents.

Between 2013 and 2020, the company has provided more than $216 million in charity care at Richmond Community Hospital alone.

Whatever the numbers, they are a come-down from when Bernard was running the show, says Markel. The former CEO was engaged with the city, the housing authority, and the community in planning the redevelopment of north Church Hill. And not just commercial development but civic improvements like streetscapes and walkability.

There’s more than meets the eye to the RCH financials, adds Markel. The hospital has been reducing the number of doctors there and cutting back on services for three years. How can it be reporting such phenomenal profits?

That’s a story for another time and another blog post.