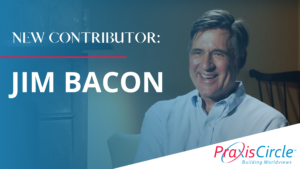 Praxis Circle is a community building worldviews to renew free society. We do this primarily through our online content and interviews of expert thought leaders on worldview topics. Today, we are thrilled to welcome as our newest Contributor a very familiar person to all regular Bacon’s Rebellion readers—founder, editor, and publisher James A. Bacon himself!

What to say about Jim? At his core, he is a dedicated Virginian. Jim graduated from the University of Virginia, obtained a masters at John Hopkins University, and promptly began his journalism career in southwest Virginia. He eventually settled in Richmond as editor of Virginia Business magazine where he became the editor-in-chief as well as its publisher.

After feeling bureaucratically stifled while witnessing the internet’s revolutionary explosion of news & opinion, Jim started Bacon’s Rebellion in 2002 as an email newsletter. It has since developed into a highly regarded online news portal and is consumed by thousands of Virginians as their primary source for state and local news as well as balanced editorial opinion.

Jim and his contributors focus almost solely on Virginia public policy issues and current political, social, and economic events. While the publication initially focused on “good government,” Bacon’s Rebellion now regularly centers squarely on the front lines of state and local culture wars with an eye on D.C.’s ever-increasing influence. Over the course of his career, Jim has watched journalism move from an emphasis on objectivity and accuracy to a current emphasis on “narrative.” This move toward political advocacy prompted him to focus on providing a counterpoint to the leftist narrative, while insisting on fact-based truth in reporting.

Jim’s Praxis Circle interview covers a wide range of topics: his worldview perspective on human nature, the type of government it requires, religion/secularism, journalism’s descent, businesses in Virginia, Critical Race Theory, DEI, and perhaps closest to his heart—free speech in higher education. Jim helped form the Alumni Free Speech Alliance (AFSA) with alumni from other schools such as Princeton, Cornell, UVA, W&L, and Davidson, to defend First Amendment rights on campus. The AFSA is growing. Please see our recent post “The Fight for Free Speech” featuring Jim and others interviewed about this effort on national television. Below are three featured clips from his interview:

Tell us about the Bacon’s Rebellion news portal

What can you do about the deconstruction of journalism?

Where is free speech most threatened?

With dense personal experience and education in history, journalism, and all things Virginia, Jim’s readers have learned to rely on his sound coverage and mature personal judgement. He offers a profound regard for the Constitution and its Bill of Rights—many of the values that have made America a shining light. He wants it to stay that way.

Jim is a genuine patriot with a rebel’s open mind to all.

To watch Jim’s full interview with Praxis Circle, click here. You can also find our other interviews and worldview resources by visiting our website at praxiscircle.com.

This entry was posted in Uncategorized and tagged Sponsored content. Bookmark the permalink.