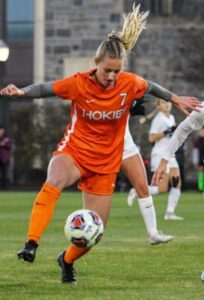 In five years, the United States has gone from a country in which football quarterback Colin Kaepernick fought for the right to kneel during the national anthem into a country where Virginia Tech soccer player Kiersten Hening is fighting for the right to stand.

During their opening match in 2020, women of the Tech women’s soccer team bent the knee during the pregame reading of the Atlantic Coast Conference’s unity pledge, a show of support for the social justice movement and Black Lives Matter. Hening, a 21-year-old native of the Richmond area, and one other player remained standing. Hening says she “supports social justice and believes black lives matter” but “does not support the BLM organization.”

During halftime, Coach Chugger Adair berated her for her stance. “He singled her out and verbally attacked her, pointing a finger directly in her face,”  according to a lawsuit Hening subsequently filed. “He denounced Hening for ‘bitching and moaning,’ for being selfish and individualistic, and for ‘doing her own thing,”

The lawsuit claims Adair continued to single her out, criticizing her performance before and during the team’s next match. Hening, who had started 37 matches during her first two seasons at Tech, did not start the next two games. She left shortly after. “Coach Adair’s campaign of abuse and retaliation made conditions for Hening so intolerable that she felt compelled to resign. Hening did not want to leave,” says the lawsuit, as reported by the Richmond Times-Dispatch.

According to the lawsuit, Adair was strongly supportive of the ACC’s equality pledge and even suggested having players wear the names of victims of alleged police misconduct on their jerseys, and that his direct supervisor, senior associate athletic director Reyna Gilbert-Lowery, “is a vocal supporter of (Black Lives Matter.)”

According to the lawsuit, Adair was aware of Hening’s political views prior to the start of the 2020 season, when he and a group of players were shown screenshots of private text messages she had sent to teammates.

A group of players then demanded on Sept. 3 that Adair address what they viewed as the racism of some of their teammates.

The lawsuit suggests this was the beginning of the coach targeting Hening for her political views.

Earlier this month, Virginia Tech was sued by the nonprofit Speech First, which alleged that the university put excessive restrictions on students’ free expression. Referring to the university’s policy on harassment and discrimination, Speech First President Nicole Neily said, “Through this elaborate disciplinary apparatus, administrators at Virginia Tech have intimidated students into silence, refraining altogether from expressing comments or viewpoints that might be perceived as controversial or offensive.”

Bacon’s bottom line: Adair’s alleged action went beyond failing to protect Hening’s right to free expression — he tried to compel her into taking a stance with which she did not agree. If her charges are true, Adair’s actions were reprehensible. The university administration should discipline him.

This entry was posted in Culture wars, Education (higher ed), Individual rights and tagged James A. Bacon. Bookmark the permalink.