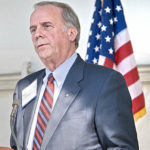 In 2020, according to documents filed with the State Corporation Commission, Dominion Energy Virginia paid former state Senator John Watkins $92,297 for lobbying services. At the end of the reporting period, it officially claimed spending only $1,641 for him to influence the legislative process.

In a similar manner, former Fairfax Delegate John Rust was retained over four years for a combined $265,000. But for his services in 2020, the year of the massive Virginia Clean Economy Act, Dominion’s lobbying expense disclosure listed his fee at $7,679.

The full payments to both former Republican legislators, all perfectly legal, are the subject of an online article on the Richmond Times Dispatch website, probably awaiting print publication. It also focuses on large payments made to a Hampton Roads journalist and former Democratic gubernatorial aide, which Dominion never had to disclose on any state report since buying friendly editorials isn’t covered by disclosure laws.

Add up the reported payments to all the other outside law and lobbying firms Dominion hired, compare them to the official disclosures, and a similar pattern of under reporting will be evident. The reporter missed the best part of this story — that information gap.

What do we learn here?  Anything we didn’t know?

Rust, who had a reputation as an excellent legal mind while in the House, basically has been providing legitimate legal and lobbying services to the utility for many sessions. His fees as finally disclosed are reasonable given the level of his skills, but the idea that such a small amount of his time qualified as “lobbying” is questionable. Fault the law, however, as time spent researching, drafting or redrafting bill language, perhaps even time in negotiations, can be excluded as “not lobbying.” The definition is that porous. Intentionally.

While in the Senate representing mainly Chesterfield and Powhatan counties, Watkins rose to the chairmanship of the Senate Commerce and Labor Committee, where the energy bills go to live or die. He was not perceived as a total tool of the utility during his tenure, and at the time it was disappointing to many of us to learn he had signed on as one of their lobbyists.

Watkins is not a lawyer or accountant providing professional services. He was likely not involved in drafting or amending any actual bill language. He was hired for his name and contacts and, frankly, his reputation as having been somewhat skeptical of the utility’s motives. The idea that only 2% of his time involved “lobbying” stretches credulity.

Most of the firms, associations and lobbying groups hide the real amounts they spend. The rules allow them to disclose only that part of their expenses tied to direct lobbying, and they use the narrowest definition possible and claim most of the time is spent on other activities. Anybody who fully discloses suddenly stands out, and appears to be the biggest spender, when in most cases they are not. Basically to level the playing field, everybody uses some method of pro rating the costs (and I have, I admit).

For once, though, with that SCC filing we get a rare glimpse at just how completely we are lawfully lied to.