More People Still Moving Out of Virginia than Moving In 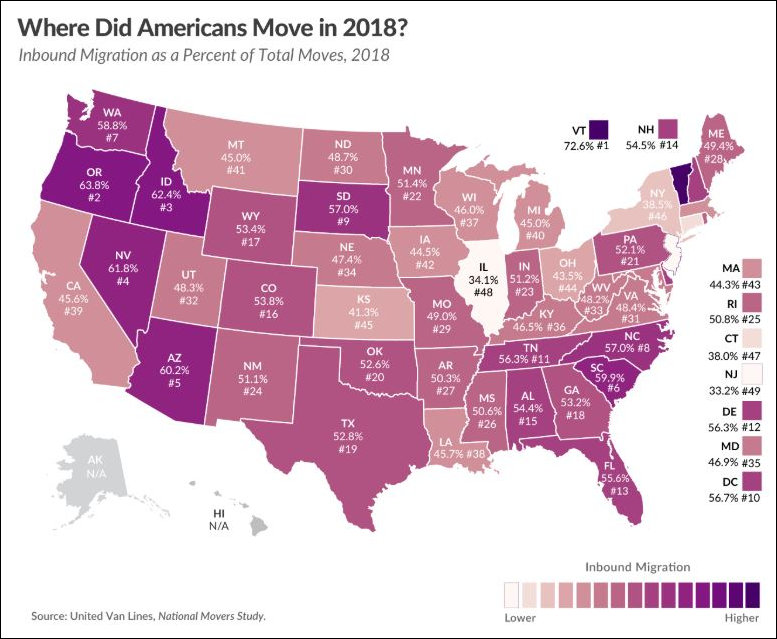 Virginia is still leaking population through out-migration, according to the most recent United Van Lines national movers study, which tracks customers’ state-to-state migration patterns in 2018. The gap between those moving into the state and moving out was small — 48.4% inbound compared to 51.6% outbound, but it continues a discouraging trend of the past several years and seemingly cements the robust in-migration of previous decades.

Dig into the numbers, however, and there were some consolations. 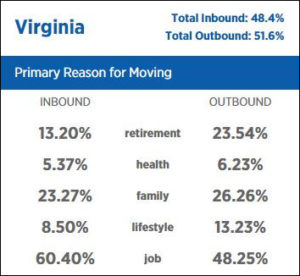 When movers listed their reasons for moving in and out of the state, the biggest gap was retirement. Can you say, “Income tax avoidance?” Virginia’s 5.75% income tax rate puts the Old Dominion at a significant disadvantage when it comes to retaining retirees with the freedom and means to live where they wish and a desire to maximize after-tax income. Possibly related to the loss of retirees, Virginia also suffered from a “lifestyle” deficit. Not enough shuffleboard courts, I suppose.

On the positive side, significantly more people listed jobs as a reason for moving into the state than moving out, an indicator of economic dynamism. 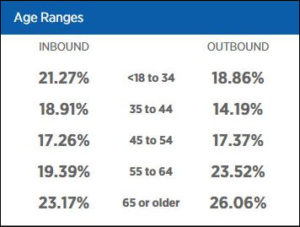 Another sign of economic vibrancy is that Virginia is experiencing a net gain in young people (ages 13 to 34, and 35 to 44). If our youth are our future, than our prospects may be better than the overall numbers suggest. The middle-aged age cohort was stable, while older age brackets showed the biggest gap between those moving in and moving out — consistent with the retirement numbers.

Also encouraging is the finding that Virginia is getting more upper-income migrants (making $150,000 income or more), to some degree offsetting the loss of middle-class households. We’ll have to wait for publication of the Internal Revenue Service taxpayer migration database, however, to see if Virginia is a net gainer or loser of income overall.

This entry was posted in Demographics, Economic development and tagged James A. Bacon. Bookmark the permalink.