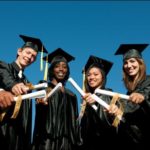 The estimable Jim Bacon notices the increased graduation rates this year and wonders how much of the increase reflects the waivers issued by the Superintendent. We have some of the underlying data.

On May 26, the Governor issued Executive Order 51 that provides, in part:

Authorization for the heads of executive branch agencies, on behalf of their regulatory boards as appropriate, and with the concurrence of their Cabinet Secretary, to waive any state requirement or regulation. . . .  All waivers issued by agencies shall be posted on their websites.

The following graduation requirements are waived based on authority granted to the Superintendent of Public Instruction per Executive Order Fifty-One (2020):

The Virginia Department of Education (VDOE) does not set out any direct measure of the effect of these waivers, but the history of the cohort graduation rates provides some clues.

But first, what rates shall we measure?

At the threshold, we might notice that the “on time” graduation rate is manipulated by the inclusion of Modified Standard diplomas that are issued to students who “are unlikely to meet the credit requirements for a Standard Diploma.”

There were fewer than ten Modified Standard diplomas this year. The Board already put its thumb on the scale as to that diploma. “The Modified Standard Diploma will not be an option for students with disabilities who enter the ninth grade for the first time beginning in 2013-2014. Credit accommodations allow students with disabilities who previously would have pursued a Modified Standard Diploma to earn a Standard Diploma.” The current jiggering is set out here: “Special education students and limited English students who have plans in place that allow them more time to graduate will be counted as graduates or non-graduates when they earn a diploma or otherwise exit high school.” Translated, that means that Special Ed and LEP students who don’t graduate in four years get counted in the next (or later) year’s cohort. Talk about win-win for boosting the graduation numbers.

The more honest numbers are the “federal” rates (counting only the advanced and standard diplomas), 89.9% this year and 88.7% last year.

Here is the recent history of the federal diploma rates. 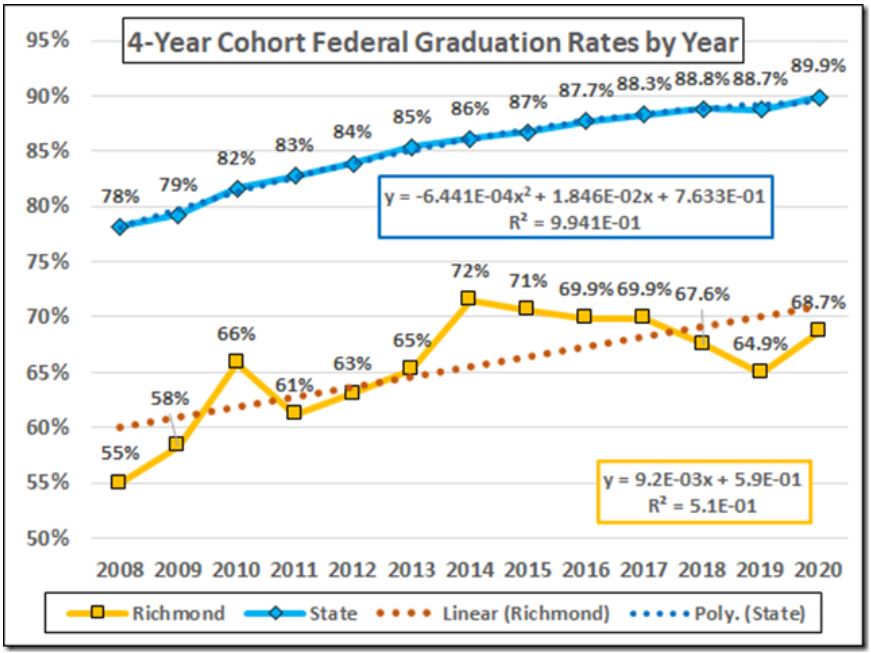 The state rate was flat between ‘18 and ‘19. Extrapolating, that suggests that the 1.2 point improvement in ‘20 was entirely artificial. The fitted line shows an annual increase of ca. 0.3% per year as of 2019, suggesting that 3/4 of the 1.2% increase this year came from the waived requirements. Slice that any way you like, most of the increase reflects administrative fiat, not academic accomplishment.

Thus, of the 98,481 students in the cohort, it looks like somewhere between about 885 and 1180 received bogus diplomas.

You and I get to wonder what kind of lying bureaucrat would brag that the artificial increase served “to ensure that students were not held back because being unable to take a Standards of Learning test or complete a required course” while ignoring the wholesale grant of degrees to students who would not have earned them.

The distribution of the 2020 division rates skews toward the low end with Richmond, the yellow datum, leading the skew. 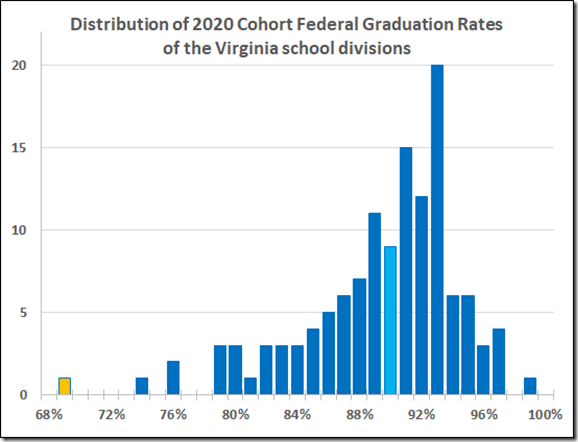 Data for Covington, Lexington, and Highland Co. are absent. I’ve colored the 90% datum light blue to indicate the location of the state average.

All that said, “economically disadvantaged” (here, “ED”) students underperform their more affluent peers (“Not ED”).  The division average SOL pass rates for the two groups differ by about 20 points.

Similarly, the (inflated) state average graduation rates for Not ED and ED students differ this year by just 10%, so the division averages again reflect affluence as well as performance. To deal with that, let’s break out the data for those two groups. 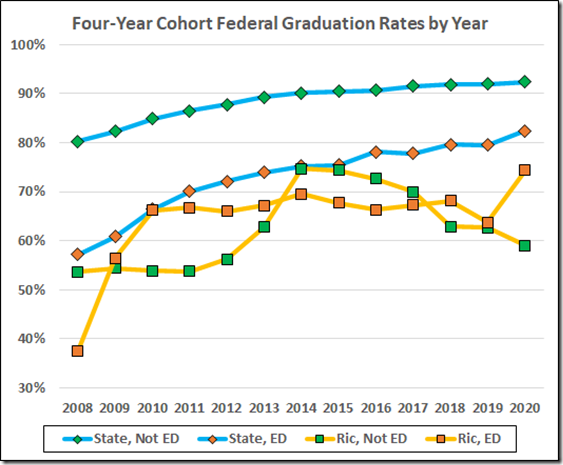 Here we see that the state average increase this year came mostly from the ED population. This makes sense, given that the ED group graduates at a lower rate and would be helped more by a waiver of graduation requirements.

As to Richmond, this year’s jump came entirely from the ED average while the graduation rate of Not ED students actually dropped.

(If you can explain that Not ED drop in the face of waived requirements, or those other fluctuations in the Richmond rates, please relieve my confusion with an email to John{at}calaf{dot}org.)

When we separate out the ED and Not ED data, Richmond’s place among the divisions is more complicated. 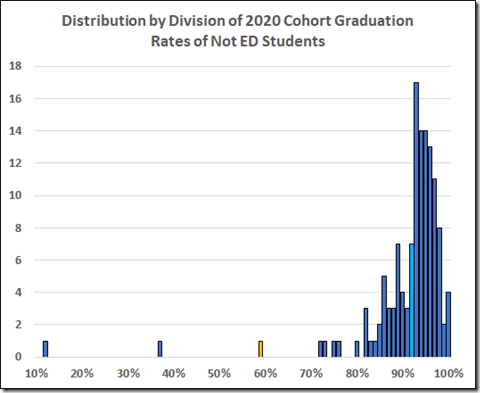 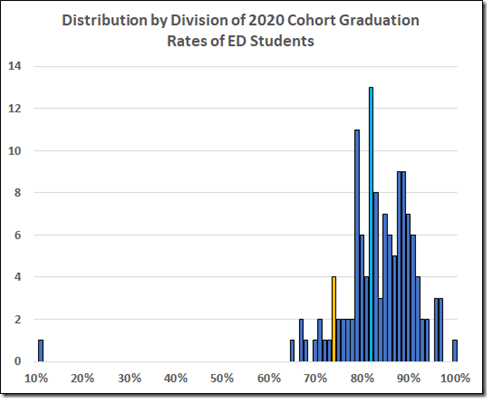 These data do not begin to explain why Richmond’s Not ED graduation rate is so appallingly low, nor why it declined (yet again) this year.

Finally, here are the graduation rate changes from 2019 to 2020, sorted by decreasing ED differences.

It is far from obvious why any of those graduation rates should decrease in light of the waivers, much less how Goochland landed a 24.76% decrease in the ED rate.

The column was republished with permission from Cranky’s Blog.

This entry was posted in Education (K-12) and tagged Guest contributors. Bookmark the permalink.