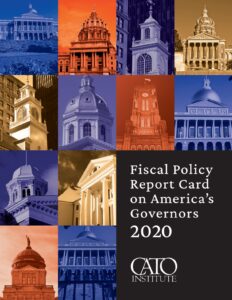 Governor Ralph Northam is one of seven governors earning an “F” grade for fiscal policy by the Cato Institute in its 2020 “Fiscal Policy Report Card on America’s Governors” report. With that score, he enjoys the company of such gubernatorial luminaries as Governors Phil Murphy of New Jersey, Andrew Cuomo of New York, and J.B. Pritzker of Illinois.

Cato, a libertarian think tank, grades the governors on the basis of seven metrics reflecting taxes and spending during their tenures. Here is Cato’s commentary on Northam:

Northam receives an F because of his low scores on both taxes and spending. Virginia’s general fund spending increased 4.9 percent in 2019 and 6.1 percent in 2020. In 2018, Northam approved the expansion of Medicaid under the federal ACA. To pay for the expansion, Northam approved two new assessments on hospitals that together will raise more than $500 million a year.

Northam has raised other taxes. In 2019, he signed a bill to conform to the broader federal income tax base under the TCJA. For the first year, Northam agreed to a Republican plan to return the increased revenues to taxpayers through a rebate, but in later years Virginians will owe more than $400 million more in annual taxes.

It could be worse. Washington Governor Jay Inslee earned scores of 4 for spending and 0 for revenue. Cato describes Inslee this way: “His appetite for spending increases is insatiable, and paying for all the increases has driven him to push nonstop for tax hikes.”

This entry was posted in Budgets, Taxes. Bookmark the permalink.

32 responses to “More Evidence that Virginia is Becoming New Jersey….”