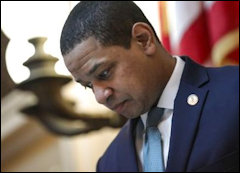 Wow, that was fast. One day Justin Fairfax was measuring the drapes for the Governor’s Mansion, now the grandees of the Virginia Democratic Party say he should step down as Lieutenant Governor. The sexual-assault charges against him are serious and his accusers deserve to be heard. But can we give it just a little bit of time before assuming his guilt and tossing him into the trash heap of history?

Fairfax, according to the Washington Post, is asking for an “appropriate and impartial” investigation into the accusations against him by Meredith Watson and Vanessa Tyson. “I am asking,” he said, “that no one rush to judgment and I am asking for there to be space in this moment for due process.”

Is that really too much to ask? It astonishes me that so many people believe that there mere existence of accusations is sufficient to remove Fairfax from office.

With two seemingly credible women alleging sexual assault, the logic goes, it doesn’t matter if Fairfax is innocent or guilty. The charges interfere with his ability to effectively carry out his job. Virginia pols are willing to give him the heave-ho before he has had a chance to recall the incidents and marshal any kind of a defense.

Democratic Party of Virginia Chairwoman Susan Swecker: “While the Lieutenant Governor deserves due process in this matter, it is in the best interest of the Commonwealth that he goes through this process as a private citizens.”

House Speaker Kirk Cox, R-Colonial Heights: “The Lt. Governor has clearly lost the trust and confidence of the people of Virginia. His ability to serve has been permanently impaired and, at this point, it is in the best interests of the Commonwealth for him to resign.”

Meanwhile, almost everyone who matters in the Virginia Democratic Party — Sen. Tim Kaine, six of the state’s seven Democratic members of Congress. Bobby Scott, the Virginia Legislative Black Caucus — have asked him to step down.

Speaking personally, I find the two women’s charges credible and damning, and Fairfax’s flailing defense so far has been unconvincing. But I have seen enough hasty judgments inflamed by press accounts to know that first impressions are not always accurate impressions. I also acknowledge that due to the nature of he-said, she-said accusations, there may be no way to authoritatively prove or disprove the accusations. Ultimately, “public opinion” may be the ultimate arbiter of whether Fairfax stays or goes. But, for God’s sake, give the man an opportunity to defend his reputation and career before casting him into the outer darkness.

Once upon a time, Virginia saw its share of lynchings. A common theme of these acts of mob justice — often targeting black men for alleged sexual transgressions — was that people acted on preliminary information and refused to give victims an opportunity to defend themselves in a court of law. No doubt some lynching victims were guilty of the crimes of which they were accused but many were not. I fully expect Republicans to exploit the circumstances for tactical political advantage. But how ironic it is that Democratic politicians, who purport to be champions of minority rights, are resurrecting Jim Crow justice to run an African-American politician out of office. The Dems aren’t throwing a noose over the tree branch, but what they are doing to Fairfax’s career can only be described as a lynching.

This entry was posted in Courts and law, Race and race relations, Scandals and tagged James A. Bacon. Bookmark the permalink.