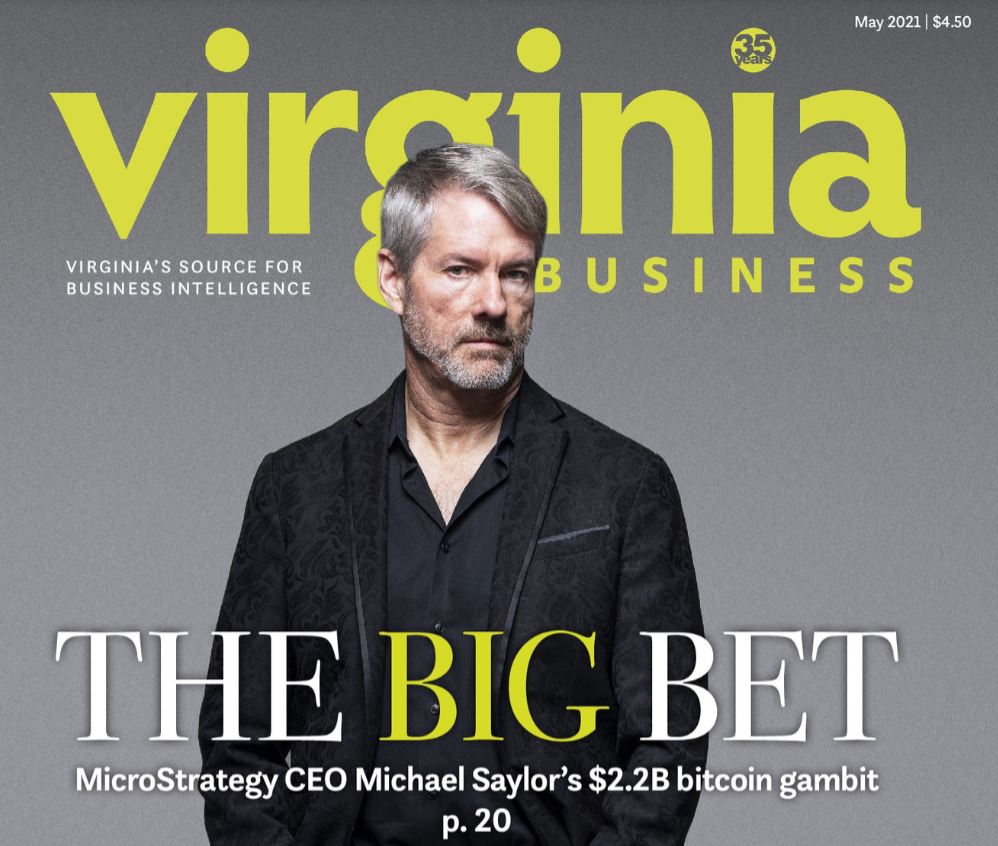 I’m glad to see this story. First, it represents a return to the kind of business journalism Virginia Business did when I was editor and publisher many eons ago, when we wrote about Virginia’s most consequential and controversial CEOs. This story is the best read about a Virginia entrepreneur that I have come across in literally years.

Second, the story explores a topic of great fascination — cryptocurrency. With my libertarian leanings, I am sympathetic to the vision of cryptocurrencies such as bitcoin as an alternative to the fiat money created by central banks. As the U.S. indulges in ever-growing deficit spending and amasses a national debt that can never be repaid, the Federal Reserve Bank will face mounting pressure to inflate away the debt. Just one problem: I don’t see bitcoin as an alternative currency. With its wildly gyrating prices, it is not a stable store of value. Put your bitcoin in the bank, and you have no idea what it will be worth tomorrow.

There’s no question, though, that Saylor is a visionary CEO. He was a sensation during the dot.com era when his company, MicroStrategy, became a darling of tech stock speculators. Saylor was one of the first evangelists for data mining, recognizing that enormous value could be extracted from big data. MicroStrategy stock price soared to insane levels — Saylor’s net worth reached $13.5 billion before collapsing. MicroStrategy survived the dot.com bubble and went on to build a respectable data mining business. Today, data mining, which merges into artificial intelligence, is arguably the hottest of hot tech sectors on the planet.

MicroStrategy began binging on bitcoin last summer, announcing in August that it had used its growing cash cache to buy 21,000 bitcoins for $250 million. It invested another $175 million a month later. And in December, the company issued $650 million through a convertible debt offering to purchase even more. As of mid-April its bitcoin holdings were worth almost $6 billion.

Right now Saylor looks like a genius. He taps a profound and spreading unease with inflationary central bank policies around the world. By his calculations, the increase in the U.S. monetary supply devalues the dollar by 15% a year. He refers to cash as “trash” and a “melting ice cube.” He calls bitcoin “digital gold,” while saying also that it will outperform gold. A recent article in Time delves deeper into his thinking than Virginia Business (with whom he declined to be interviewed.)

Responding to the suggestion that the surge in bitcoin prices might be an example of “irrational exuberance,” Saylor responded that, no, it’s the opposite.

It’s a textbook example of a rational action in response to monetary inflation. Can we agree that the money supply is expanding in an unprecedented fashion the past 12 months everywhere in the world? If you’re going to make a rational investment decision today, whether you’re a real estate investor, a stock investor, a bond investor, or just a wage earner or you’re a treasurer, you have to estimate the rate of monetary expansion for the next eight years. We know there’s a commitment to run deficits, and we know this commitment to stimulus.

So now the issue is, What’s a rational behavior? I’ve got to find a store of value. If you’re looking for an example of real speculation, it would be people speculating upon whether they can squeeze others in a short squeeze and a small stock, like GameStop. Bitcoin is not speculation, O.K.? Bitcoin is a unique new technology, it’s like the Facebook of money or the Google of money. And it grew from nothing to a trillion dollars in monetary value in 12 years.

Virginia Business quotes David Bieri, organizer of Virginia Tech’s annual blockchain (the technology that underlies bitcoin) symposium, as saying that the cryptocurrency is “very prone to crises and bubbles.” The digital currency has no intrinsic value. Its price undergoes wild swings that ordinary investors can’t begin to explain. Perhaps most tellingly, Bieri suggests that the rise of quantum computers poses an existential risk to blockchain at some point in the future.

This entry was posted in Business and Economy, Uncategorized and tagged James A. Bacon. Bookmark the permalink.