Permit me to introduce you to Merle Rutledge, the Republican candidate for governor that no one is talking about. To be sure, his chances of winning the nomination are just about zero, but that’s no reason to pretend he doesn’t exist. Personally, I find his candidacy intriguing — not because I share his views, which I find extreme, but because of the light he sheds on an important political dynamic that isn’t getting nearly enough attention.

According to Essence magazine, 18% of black men voted for Donald Trump for president. That’s astonishing. Those voters didn’t attend elite universities like the people purporting to speak for the black race you see on CNN or MSNBC. They tend to be working class and middle class, they tend to be culturally conservative, and they, like their white counterparts, are worried about America’s fraying culture and the bankruptcy of Democratic Party prescriptions for society.

Rutledge maintains a campaign website and a Facebook page, where you can examine his priorities. He is not running on his biography — the 41-year-old Norfolk State University graduate has never held public office. His “career experience” is vaguely listed on Ballotpedia as “freelance investigative reporter.” Instead, Rutledge is running on the issues that preoccupy him. He calls himself pro-business and pro-constitutionalist, and he is a huge supporter of gun rights.

In the video posted above, Rutledge addresses a real-world issue that you’ll never hear the self-appointed spokespersons for black people talk about unless it’s from a feminist perspective: domestic violence. His friend and her daughter were recently “murdered in cold blood” by the woman’s boyfriend, he explains. The boyfriend was armed and went on a shooting rampage. He was caught and locked up, Rutledge says, but he left behind a lot of family members trying to come to grips with the tragedy.

The issue of domestic violence is real to Rutledge. Murders happen to people he knows, not just to people whos faces appear on television. Now, I’m not sure I agree with his response to the problem — arming women with guns so they can defend themselves — but I can see he’s coming from a very different place on the gun-rights issue than cosseted upper-middle class members of the intelligentsia who see guns rights through the prism of, say, the Newtown school shooting.

The United States is increasingly divided between those whose positions in life insulate them from cultural chaos and decay and those who are directly in the line of fire, so to speak, of social breakdown. Even as elite college-educated liberals and progressives become increasingly “woke” over social justice issues, African-American men — supposedly more victimized than anyone by police violence — are becoming less woke. They are less inclined to see racism as the  problem than to see the rule of disconnected elites as the problem. As they come to this realization, an increasing number of them are making common cause with working/middle-class whites who feel the same way.

As culturally conservative blacks and whites discover that their commonalities on issues like guns rights and abortion dwarf their racial differences, expect to see a lot more pictures like this one taken from Rutledge’s website: 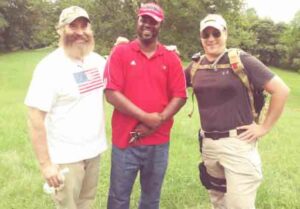 While it’s impossible to take Rutledge seriously as a political candidate — the Virginia Public Access Project database says that Rutledge for Governor has reported $0 in contributions and has $0 on hand — it would be foolish to dismiss him as an aberration. I suspect that his tilting-at-windmills campaign is indicative of a fundamental political realignment taking place in this country — a realignment that has so far eluded the attention of the political class and its media allies.

This entry was posted in Gun rights, Politics and tagged James A. Bacon. Bookmark the permalink.