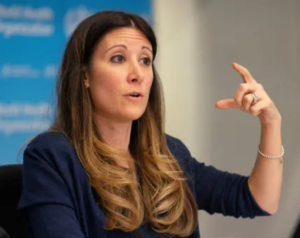 Someone find me a lawyer. I think I have whiplash.

Not sure you can sue the World Health Organization, though, for acting more like political spin doctors than medical ones.

Perhaps you heard. On Monday, Dr. Maria Van Kerkhove, an epidemiologist and head of the WHO’s emerging diseases and zoonosis unit and the technical lead of the Covid-19 response team, spoke at the United Nation’s Headquarters in Geneva where she shocked the world by saying in no uncertain terms that asymptomatic people were not fueling the spread of the coronavirus.

“From the data we have, it still seems to be rare that an asymptomatic person actually transmits onward to a secondary individual,” said Kerkhove, head of WHO’s emerging diseases and zoonosis unit, said at a news briefing from the United Nations agency’s Geneva headquarters. “It’s very rare.”

Which means that the specter of countless Typhoid Marys roaming the world – unmasked – infecting others with Covid-19 and killing countless grandmas was, well, the stuff of fiction.

Remind me again, why are healthy people being ordered to wear masks? Oh yeah, that’s right, to prevent the spread of the disease by asymptomatic carriers.

When you combine Kerkhove’s revelation with the May 21 announcement from the Centers for Disease Control that the virus doesn’t survive long on surfaces – which reversed earlier statements suggesting the virus could live for days on stainless steel and plastic – many of us ordinary schlumps began to wonder why Virginia’s governor and others issued stay-at-home orders for healthy people, shut down businesses, closed schools and forced the American economy into a manmade recession.

Could it all have been a massive over-reaction based on non-scientific hysteria?

Common sense would say if only those with symptoms spread the disease and if it doesn’t survive long on surfaces, why don’t sick people just stay home and everyone else resume life?

Of course, when officials at the WHO realized that Van Kerkhove had accidentally spoken the truth and had singlehandedly destroyed much of the we’re-all-going-to-die narrative, there were panicked attempts to walk back her statement.

Not easy to do, considering that Dr. Van Kerkhove had been clear about what she was saying and she’s rather knowledgeable about this pandemic. After all, she’s the WHO’s technical lead for the Covid-19 response team and her credentials are impressive: Undergraduate degree from Cornell, medical degree from Stanford and a PhD from the London School of Hygiene and Tropical Medicine.

Still, she did her best to try to, er, clarify what she said one day earlier, according to CNN. Unfortunately, she had to resort to gibberish:

“What I was referring to yesterday in the press conference were very few studies — some two or three studies that had been published that actually try to follow asymptomatic cases, so people who are infected, over time, and then look at all of their contacts and see how many additional people were infected,” Van Kerkhove said.

“And that’s a very small subset of studies. So I was responding to a question at the press conference. I wasn’t stating a policy of WHO or anything like that,” she said. “Because this is a major unknown, because there are so many unknowns around this, some modeling groups have tried to estimate what is the proportion of asymptomatic people that may transmit.”

Frankly, scientists don’t pretend that they didn’t mean what they clearly said. Politicians do that.

Looks like the president was right to pull out of this “health” organization that has done more to confuse and frighten the public about the dangers of the coronavirus than enlighten it.