Love Is A Juicy Tomato, A Ripe Melon

“We as a country have fallen out of love with healthy fruits and vegetables.”

Dominic Barrett said that while sitting at a picnic table a few feet from an acre of healthy fruits and vegetables, a new urban garden in the heart of Northside Richmond created by Shalom Farms.  The location is in my neighborhood beside my normal walking path.  Looking for a story I asked Barrett to meet me there and talk.

Turns out the story is there is no big story, and it’s told from time to time.  This is another example of Richmonders (Virginians, Americans) seeing a problem and doing something about it.  No fuss, no muss, no parade permits, no angry tweets.  The non-profit farm was stared a decade ago as a United Methodist urban mission, has spun off and is now approaching $1 million in annual budget, its staff supplemented by thousands of volunteer hours.

While official statistics indicate that only one in ten of us eats enough healthy fruits and vegetables, Barrett and his group have plenty of customers for their produce.  Nobody has fallen out of love with fresh-picked tomatoes or corn. Shalom Farms sells product at discounted prices from a “Grown to Go” truck which stops at 11 locations in the city (the stop I saw was bustling), through Richmond Healthy Corner Stores, and give much of it away through a network of other distribution points.

They measure their 2017 output as about 550,000 “servings.”  They also offer food preparation classes, have visitors out to their larger 12-acre farm off Virginia 288 in Powhatan County, and for a few people offer a personalized prescription produce plan to restore health.  A key partner is Health Brigade, formally known as the Fan Free Clinic. 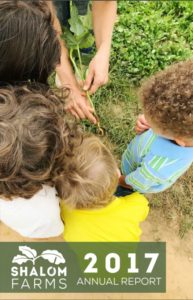 The stories about “food deserts” often fail to mention that decades ago home or neighborhood vegetable gardens or fruit trees were common, even in the city, supplementing purchased food.  This time of year, people were awash with produce grown, given or traded.  At least some of the bounty was then canned or preserved in some other way.  Modern distractions, growing incomes, sprawling supermarkets – all have had a hand in the decline of home gardens.

And of course, as Barrett lists as his biggest lesson from his time in the work, farming is hard and risky.  Why risk a failure from weather or insects when stores have abundant supplies?  But big stores are rare in parts of the city, while cheap and attractive unhealthy food choices are everywhere.  Barrett reported that the group has strong relationships with grocery chains in the area, who do not see Shalom as competition.

The farm on the Westwood Tract inside the city has generated no controversy, Barrett reported.  Five acres are rented from Union Theological Seminary and sit on the edge of a large park-like expanse which is actually at risk for future development.  Many neighbors would prefer the farm to 300 more apartments.

Shalom Farms follows organic practices and has been certified as a natural grower but has not taken the steps (which can be expensive) for official organic certification.  Nor does it preach the Gospel of Organic that discourages people from commercially-grown or even canned or frozen vegetables or fruits.   Fresh is great, local is great, but it’s all better than most prepared foods, so enjoy.

There are aspects of the nutrition challenge Shalom Farms leaves to others, despite what Barrett called “the temptation to be all things.”  The mission is not to rekindle the practice of home gardening, or to feed mass numbers of people.  Like millions of other Americans, they do what they can for those they can reach.  As I said, no big story, nothing new here, but a welcome reminder that more good is being done daily than most realize, and we don’t celebrate that enough.

This entry was posted in Not-for-profits and tagged Stephen D. Haner. Bookmark the permalink.