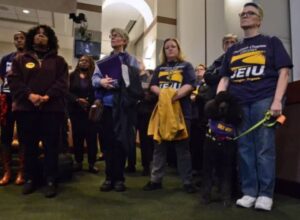 Democrats on the county board are moving toward that possibility, starting with a party-line vote on Oct. 20 to allow labor associations and organizations with more than 100 members to hold open houses twice per year in the Shenandoah Building and County Government Center in Leesburg, and in the county government offices on Ridgetop Circle in Sterling. Supervisors also directed the staff to allow for those organizations to include materials in the county’s new hire packets, if they have more than 100 members who are Loudoun County government employees.

Step two: It quickly becomes apparent that higher wages must be paid for now, which increases pressure to raise taxes. Accordingly, Democrat office holders find politically easier to increase retirement benefits, which can be paid for later (if ever).

Step three: State and local governments fail to put aside enough money to pay for future retirement benefits, and unfunded liabilities increase. The underfunding is most severe in two types of states: poor states and states that bargain with public-employee unions that run up costs. As Virginia embraces public bargaining by government unions, it will move into the second category.

At present, Virginia has managed avoid letting its unfunded liabilities run out of control. According to Yahoo! Finance, “Virginia’s per-person unfunded pension liabilities increased by only 5.9% last year, placing it among the 15 lowest in the country.” The Virginia Retirement System has its issues, to be sure, but Yahoo! Finance rates it the 10th best funded in the country.

But that’s today. As our political economy increasingly resembles that of the Garden State, so will our government pension system. And New Jersey, says Yahoo! Finance, has the 10th worst pension funding in the country.

The Blue state model of governance does a wonderful job of keeping the Democratic Party coalition in power, but it runs on borrowed money and borrowed time. That’s where Virginia is heading.

This entry was posted in Government workers and pensions and tagged James A. Bacon. Bookmark the permalink.