In my last blog post, “From the U.S. to Argentina in 20 Years,” I noted that interest on the national debt will amount to $829 billion a year by 2019, if we are to believe the Office of Management and Budget’s most recent 10-year budget forecast. That projection assumes, however, that 10-year Treasury bond yields increase to no more than 5.2% and stay stable for most of the decade. How realistic is that assumption, and what happens if the forecast is wrong?

To provide some perspective, let’s look at the history of Treasury bond yields. Using Federal Reserve Board data, I’ve charted the past 30 years. 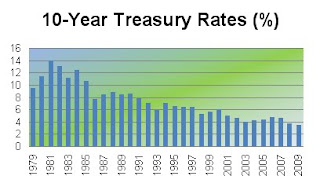 As you can see, the current 10-year Treasury bond yield of 3.4% is about the lowest it has been for an entire generation. The Obama administration does allow for a slight uptick in long-term rates to a level consistent with the experience of the past decade. The question then is this: Is the last decade’s experience of low interest rates likely to persist in the future?

If we experience more of the same, Obama’s interest rate forecast is reasonable. If interest rates climb to levels seen in previous decades, the forecast is too optimistic, deficits will be worse, and the glide to insolvency will be steeper.

As far as interest rates go, I believe that we are living in the best of times. To quote Federal Reserve Board Chairman Ben Bernanke, when addressing the German Bundesbanke in 2007, the world is experiencing “a global savings glut.” He attributes that glut largely to a savings surge in large developing countries like India and China. (I have seen estimates from other sources that the Chinese save 40% of their income. As their economy has grown and incomes have soared, so have their savings.)

Far be it from me to tell Mr. Bernanke his business, but I would humbly hypothesize that this glut will dissipate in the mid-term future. Most of the advanced industrial economies in Europe, North America and the Asian Rim, as well as China, are growing old. Households save (or governments save for them) in order to provide for their retirement. When the working-age population is a large percentage of the whole, the savings rate is high. When large segments of the population reach retirement age and people begin drawing down their savings to support themselves, the savings rate declines.

Nowhere is this trend clearer than in Japan, long known for the frugality of its population. The Organisation for Economic Cooperation and Development (OECD) tracks the savings rate of member nations here (see “Saving, Household Saving Rate”). The data show that Japan, which attained a formidable household savings rate of 15.0% in 1990, has experienced a steady decline as its population has aged. (Japan has the oldest average population of any country in the world.) This year, Japan’s saving rate is a mere 3.5% — almost as pitiful as the U.S.’s rate. The savings decline has been equally marked in Korea, which also is aging rapidly.

The major European economies are maintaining high savings rates right now (with Finland a bizarre exception — it seems to be dis-saving). But, if my conjecture is right, as their working-age populations begin retiring in large numbers, their savings rates will decline. Most importantly, the same is true of China, which, with its one-child policy, may be aging the most rapidly of any society on the planet.

These trends will take 10 or more years to become manifest, but they are more or less inevitable. So, in the year 2019, just as U.S. budget deficits are growing by $1 trillion a year or so, the world will be transitioning from Bernanke’s global savings glut to Bacon’s global savings gap.

The Obama administration understands the implications of the domestic Age Wave for the purpose of forecasting U.S. spending on entitlements, but it has ignored the implication of the global Age Wave on savings and capital formation. I’m not singling out Obama here — almost everyone has overlooked it. But Obama is the one making the 10-year forecast. For the past 20-30 years, every major industrial and developing economy in the world has been injecting savings into the global pool of capital. Within 10 years, every major economy will start drawing down that savings to support an aging population. And that draw-down will accelerate with each passing year.

Bacon’s bottom line: It takes a collosal act of faith to believe that the interest rate picture 10 years out will resemble the interest rate environment of the past decade. It takes an ostrich mentality to believe Obama’s OMB forecast that 10-year Treasuries will remain stable at 5.2% for the next decade. If my analysis is correct, the U.S. interest rate burden will exceed the $829 billion a year in the official forecast by a wide margin. If yields return to the 8.0% level seen as recently as 1991, interest payments could well consume $1.3 trillion a year. At that stage, the debt burden will grow uncontrollably, taking on a life of its own.

The U.S. cannot long continue down that path before foreign lenders stop lending to us and the final fiscal crisis consumes us. How will Virginia be positioned to weather that final crisis? Will we follow the example of California in its slide into the abyss, or will we remain a rock of fiscal rectitude? Do either of our candidates for governor even recognize the magnitude of the challenge?