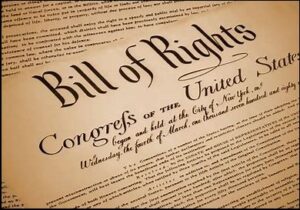 The U.S. Constitution proceeded from and combined with the Declaration of Independence to form the basis on which we the people agreed to form a government. At its core it limits government so that government cannot limit freedom. The separation of powers within each state government and all laws of each state must conform to its requirements.

Judge Andrew Napolitano sees violations of the U.S. Constitution in the responses of some Governors to COVID-19. We need not agree to see what can be done to limit the power of a single individual to restrict freedoms while preserving state capabilities to act in extremis.

The law change I propose for Virginia is appropriate for every state in the country that gives its Governor the unfettered authority to declare an emergency and then, by virtue of that declaration, govern through executive orders and levy penalties for their violation without approval of the General Assembly.

I am going to take the judge’s findings and offer a layman’s assessment of current law and the constitution of Virginia of what might be done to meet potential U.S. constitutional objections.

The findings here about the shortcomings in Virginia law reflect objective assessment of Virginia law as written and of the U.S. Constitution.

My proposition is that if changes can be made in Virginia law to protect rights without negatively affecting state government response, then they must be made.

“The Governor shall be Director of Emergency Management. He shall take such action from time to time as is necessary for the adequate promotion and coordination of state and local emergency services activities relating to the safety and welfare of the Commonwealth in time of disasters.

The Governor shall have, in addition to his powers hereinafter or elsewhere prescribed by law, the following powers and duties:

To proclaim and publish such rules and regulations and to issue such orders as may, in his judgment, be necessary to accomplish the purposes of this chapter including, but not limited to such measures as are in his judgment required to control, restrict, allocate or regulate the use, sale, production and distribution of food, fuel, clothing and other commodities, materials, goods, services and resources under any state or federal emergency services programs.

He may direct and compel evacuation of all or part of the populace from any stricken or threatened area if this action is deemed necessary for the preservation of life, implement emergency mitigation, preparedness, response or recovery actions; prescribe routes, modes of transportation and destination in connection with evacuation; and control ingress and egress at an emergency area, including the movement of persons within the area and the occupancy of premises therein.

Such executive orders declaring a state of emergency may address exceptional circumstances that exist relating to an order of quarantine or an order of isolation concerning a communicable disease of public health threat that is issued by the State Health Commissioner for an affected area of the Commonwealth pursuant to Article 3.02 (§ 32.1-48.05 et seq.) of Chapter 2 of Title 32.1.

This law is unnecessarily broad. I honestly think § 44-146.17 reflects a failure of imagination. When this law was written, the General Assembly was thinking hurricanes (Katrina) and terrorist attacks (9/11), both kinetic events, not long lasting pandemics. I also note that this law as written makes it irrelevant whether the General Assembly is in session or not.

“The current interferences with the exercise of rights protected by the Bill of Rights devolve around travel, assembly, interstate commercial activities and the exercise of religious beliefs. These infringements have all come from state governors who claim the power to do so, and they raise three profound constitutional issues. “

“The first is: Do governors have inherent power in an emergency to craft regulations that carry the force of law? The answer is no. The Guarantee Clause of the Constitution mandates a republican (lowercase “r”) form of government in the states. That means the separation of powers into three branches, each with a distinct function that cannot constitutionally be performed by either of the other two. Since only a representative legislature can write laws that carry criminal penalties and incur the use of force, the governor of a state cannot constitutionally write laws.”

Unconstitutional Delegation of Authority by the Legislature

“The second constitutional issue is:

Can state legislatures delegate away to governors their law-making powers?

Again, the answer is no because the separation of powers prevents one branch of government from ceding to another branch its core powers. The separation was crafted not to preserve the integrity of each branch but to assure the preservation of personal liberty by preventing the accumulation of too much power in any one branch. We are not talking about a state legislature delegating to a board of medical examiners in the executive branch the power to license physicians. We are talking about delegating away a core power — the authority to create crimes and craft punishments. Such a delegation would be an egregious violation of the Guarantee Clause.”

Unconstitutional Use of the Powers of the Legislature

“The third constitutional issue is:

Can a state legislature enact laws that interfere with personal liberties protected by the Bill of Rights, prescribe punishments for violations of those laws and authorize governors to use force to compel compliance?”

“Again, the answer is no because all government in America is subordinate to the natural rights articulated in the Bill of Rights and embraced in the Ninth Amendment.”

So the General Assembly must at least stand up and be counted if Virginia restricts constitutional rights and levies punishments for violations of such restrictions.

Federal courts are much more likely to give a state the benefit of the doubt that it acted with proper consideration of the consequences to freedoms if the legislature concurs in such actions. “We the people” would certainly want that to be the case.

In preparing for the next session of the General Assembly, members should consider introducing legislation to amend § 44-146.17 of the Code of Virginia.

The Virginia constitution requires that laws be considered and passed by the appropriate committees of the Virginia House and Senate and then by the whole of each chamber. With modern communications most executive orders can be turned into laws by the actions of the General Assembly without necessity of meeting in Richmond. The state constitution calls for “meetings.” Secure mobile communications, including meeting software, can get the job done. Recording and making public those committee meetings and votes of the General Assembly would fulfill the needs of the sunshine laws and would tend to ensure that votes were not taken without full consideration of the consequences.

The change can permit the Governor to issue executive orders in extremis (term would have to be carefully defined) that must be passed as law by the General Assembly within a specified number of days or be automatically repealed.

The kinds of executive orders that we have seen in this pandemic have not been issued in extremis. They could have been considered by the General Assembly in electronic meetings. Such a procedure would remove the considerable threat to liberty posed by a single person in effect writing laws and enforcing them.

The bi-cameral General Assembly, with two party membership, would be much more likely to consider the limits on laws constraining rights protected by the U.S. Constitution than would that single person given dictatorial powers.

So it is clear that one does not need to agree with Judge Napolitano to thank him for raising the issues.

We can do better.

This entry was posted in General Assembly, Governance, Uncategorized. Bookmark the permalink.