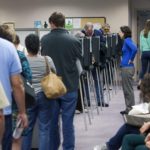 I barely recognized Mark Obenshain (the Republican state senator from Harrisonburg — ed.) the last time I saw him, and had to tell him who I was. Odd, because we used to run into each other regularly at Keister Elementary, at one time our shared precinct.

That was back when all politics was still local in Harrisonburg. There could be an Obenshain barn sign stored in a shed at a city elementary school and a Democratic official – that would be me – could roll his eyes and entertain the possibility it was donated for art projects. As an election judge, formally closing the polls, I could find Mark and one other guy chatting outside on a cold Election Day and just tell them, instead of making a loud declaration.

The big change from all politics being local began when Suzanne and the now-retired registrar took various actions to prevent or slow student registration in 2008. But as late as 2010 I could still see Mark outside the polls at Keister and note that it was the last local election for 12 years.

I sort of remember thinking he was one of the few people who would get it. With local elections moved from May to November, the congressional year without a Senate or Presidential race was the only time local issues and city council candidates might dominate the ballot.
As it turned out, that may not have been the case in 2010. The best numbers guys in Harrisonburg – me and one other guy – agreed that turnout might reach 5,000 and could even reach the extreme high of 5,500. Imagine my surprise when I ran into Ted Byrd at Waterman precinct in mid-afternoon and he told me 5,800 people had already voted. (The day’s turnout was eventually 6,200.)

What that meant in political terms was that even with no Democratic nominee on the ballot against Bob Goodlatte, the congressional race was driving the turnout. It was the Tea Party year, when Sarah Palin was predicting the death panels that wouldn’t become relevant until Trump bungled the pandemic response. Turnout was driven by a lie, much the same as it will be if Critical Race Theory and bathroom usage decide School Board races this year.

The 2021 governor’s race will still be top of the ballot and the main driver of turnout, but a clue to the power of CRT, bathrooms, and anti-mask sentiment will be in the percentage of voters who stick with the ballot long enough to vote in, for instance, the Rockingham District 3 School Board race. And it’s worth noting that local races can still predominate in an odd-numbered year, but only when those once-in-a-generation changes of clerk, sheriff, or prosecutor occur.

The Democratic version of the Tea Party year was the 2018 election. Antipathy toward Trump and GOP Senate nominee Corey Stewart drove turnout in a way that gave Tim Kaine the largest winning percentage in a U.S. Senate race in politically modern times against a serious party nominee in a non-presidential year. (The number of qualifications here is to insulate Kaine against jealousy or envy from any other United States senators from Virginia who might have a competitive streak.) Sensible projections said 45% turnout statewide and maybe 10,000 voting in Harrisonburg for the first time in a non-presidential year. Actual turnout was almost 60% statewide and close to 14,000 in the city.

Locally, the turnout in 2018 meant Sal Romero and Chris Jones were elected the day they were nominated by the Democratic Party. (HHS2 enhanced the margin of victory, but didn’t produce the win.) The Republicans tried everything, from running a Republican as an independent to providing false voting instructions at the polls, but their candidates didn’t really have a chance.

So what does all this mean locally going into 2022?

To begin with, anomalous turnout such as 2010, 2018, or, going back some, the 2000 city council election is driven by negatives. Respectively, no death panels, no Corey/Trump, no golf course. (Two out of three ain’t bad.) The question next year will be whether any large negatives drive turnout on either side.

The Pubs have the advantage there because they’ve been able to add anti-vax sentiment, bathroom usage, and non-existent teaching of critical race theory to their unholy trinity of guns, abortion, and election fraud. The strong negatives are on their side, with the question being whether those are enough to increase turnout in the congressional race. As it stands right now, Ben Cline will win reelection against Jen Lewis, but a nomination fight from Danny Lebeau could increase interest, as could fabricated demonization of the eventual Dem nominee.

There are at least three scenarios for the Harrisonburg City Council race. If turnout is strong enough in the Congressional race, that could be the driver of the Harrisonburg City Council election. If arguments over bathrooms and the right to infect one’s neighbors hold sway, a Republican could do better than usual in an increasingly Democratic city. If the Democratic turnout advantage continues to recover from the pandemic – student registration dropped and isn’t all the way back – backlash against Cline could negate any GOP chances. But if the Congressional race is relatively lackluster, city council could be a truly local race, with a serious opening for a stealth Republican or a true independent.

With an election in 17 days, discussion of the next election becomes like Christmas decorations and sales; It doesn’t matter how early you start, it’ll be too soon for some folks, and only the people directly involved understand the reasons for starting as early as possible.

This entry was posted in Elections and tagged Joe Fitzgerald. Bookmark the permalink.