Kick Out the Punks Before They Kill Someone 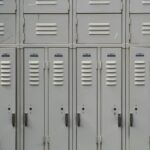 School officials are wringing their hands in Newport News right now, wondering what they could have done to prevent a shooting at Heritage High School that left a 17-year-old boy and girl with bullet wounds.

On Monday morning, outside of the school cafeteria, the boy was shot in the head and leg, the girl was also shot in her leg and several other students were injured in the chaos that followed the incident.

Frightened kids were herded out of the school to Heritage’s tennis courts, where they waited for their parents.

News reports initially said the suspect and the victims knew each other, but the injured boy told detectives he didn’t know the shooter. The Daily Press reports that much of the crime was caught on school surveillance cameras. After a brief fight in the hallway, which was broken up by a teacher, the suspect reached into his backpack, removed an item and minutes later pulled a gun out of his waistband and began shooting.

The alleged shooter, a 15-year-old student, has been arrested and charged with an array of felonies, including two counts of aggravated malicious wounding, two counts of using of a firearm in the commission of a felony and other weapons charges.

If convicted — and not cut loose by a soft-headed governor — this kid will be in prison for a very long time.

He was transported to juvenile detention once he was apprehended.

It wasn’t hard to find him. According to court records the suspect was wearing a tracking device, placed on his ankle by juvenile authorities.

Juvenile records are not public, so we are left to speculate on why the alleged shooter was wearing electronic tracking. Sources in law enforcement tell me that he was likely out on bond from juvenile court or he was on juvenile probation.

Who knew there was such a thing? I assumed that when most teens commit crimes they live in juvenile detention until they turn 18.

Even more shocking, The Daily Press reports that another student in the suspect’s fifth period class also wears an electronic monitoring device.

I wonder how many others in that school are outfitted with similar fashion accessories?

The Newport News School Board will be meeting next month to decide what — if any — measures should be taken to prevent shootings in schools.

The district owns metal detectors but has been loathe to place them at the entrances to Heritage High because of the optics. School officials worry that detectors by the doors create an ambiance of penal institution.

Depending on how many other students are wearing ankle bracelets, maybe THAT shouldn’t be a concern.

But here’s a better idea: If a kid has committed a crime that warrants a court-ordered tracking device, perhaps they shouldn’t be allowed back in school. Let the parents who reared these punks figure out how to educate them.

At some point the safety of the good kids in public schools should trump second — or third — chances for the bad ones.