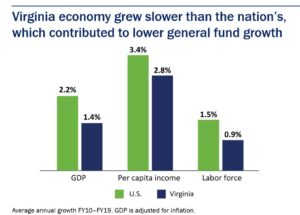 Source: JLARC October 7 report on state spending over time, in this case a decade of sustained economic growth with no recession.

Every year, the Joint Legislative Audit and Review Commission issues a report looking at ten years of state spending, sliced and diced various ways. In recent years, the headline results have largely been surprisingly consistent and the 2019 report issued Monday fit the pattern. As seen before:

The summary presentation was given by Ellen Miller of the JLARC staff, but the full report is worth a review.  To figure out annual changes, compare it to the 2018 version and then perhaps go back a full decade to the 2009 report. Over the years it is the consistency that surprises.  State government is Medicaid, transportation, higher education and local schools, with everything else gathering crumbs. 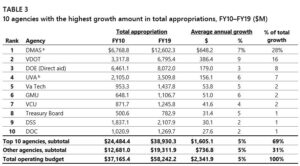 Click for larger view. Growth in total agency appropriations, FY10-19. The same chart for FY00-09 is below.

The state’s general fund (thanks to the below-average economic results) grows slowly, 1.6% per year over the period when adjusted for inflation and population growth. But non-general funds — tuition and fees, federal funds for Medicaid and education, transportation taxes and tolls – rose a steady 3.2% per year for a decade. Combine the two and real growth (adjusted for inflation and population) is 2.6%. Again, that is against a backdrop of 1.4% GDP growth in the same period. If not alarmed about sustainability, you should at least be concerned. 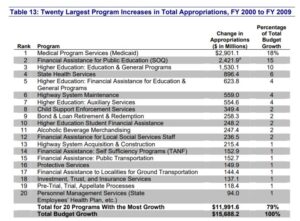 Click for larger view. Growth in total appropriations, FY 2000-09. If the higher education accounts are combined, they led growth for that decade, which saw substantially smaller growth in transportation funding. Source: JLARC

Unlike some other recent state reports, the JLARC summary does capture and include the first six months of Medicaid expansion, adding more individuals to coverage and increasing payments to providers.  The new hospital assessment revenues that comprise the state share of expansion costs are considered non-general funds, the same designation as the federal funds provided to the state for Medicaid. But looking at general fund (general tax) monies only, Medicaid growth still sucked up 39% of all growth dollars for the decade, an average of $288 million per year.

Are those hospital payments non-general funds? Should they be considered taxes? They are a percentage of hospital gross receipts, a traditional taxation method. But the dollars flow into and then out of Medicaid accounts, never leaving that program. Keeping them out of the general fund allows its growth to appear more constrained.

In another part of the meeting, JLARC staff reported that its review of the state’s process for determining Medicaid eligibility was largely positive. The decision to expand the program last year, increasing the income cut off to 138% of the poverty level and allowing working-age adults without children to apply, did create a rush of processing, but staff was added and delays few. It is possible to apply for Medicaid on the same federal web portal used to enter Affordable Care Act programs.

Priority was given to individuals already in partial-coverage programs, helping them transition into full coverage. Those smaller programs helped individuals with mental illness, substance abuse disorders, and family planning services. Also fairly easy to process were parents who already had children on Medicaid and some recipients of the food program SNAP.

The one possible problem identified by JLARC is many individuals were placed in the enrollment expansion population when they actually qualified for regular Medicaid, using the rules before expansion. There is a higher federal reimbursement rate for people picked up under expansion, but the federal government may balk at paying that for people who belonged in the main program. Corrections to those assignments are being made, the staff reported.