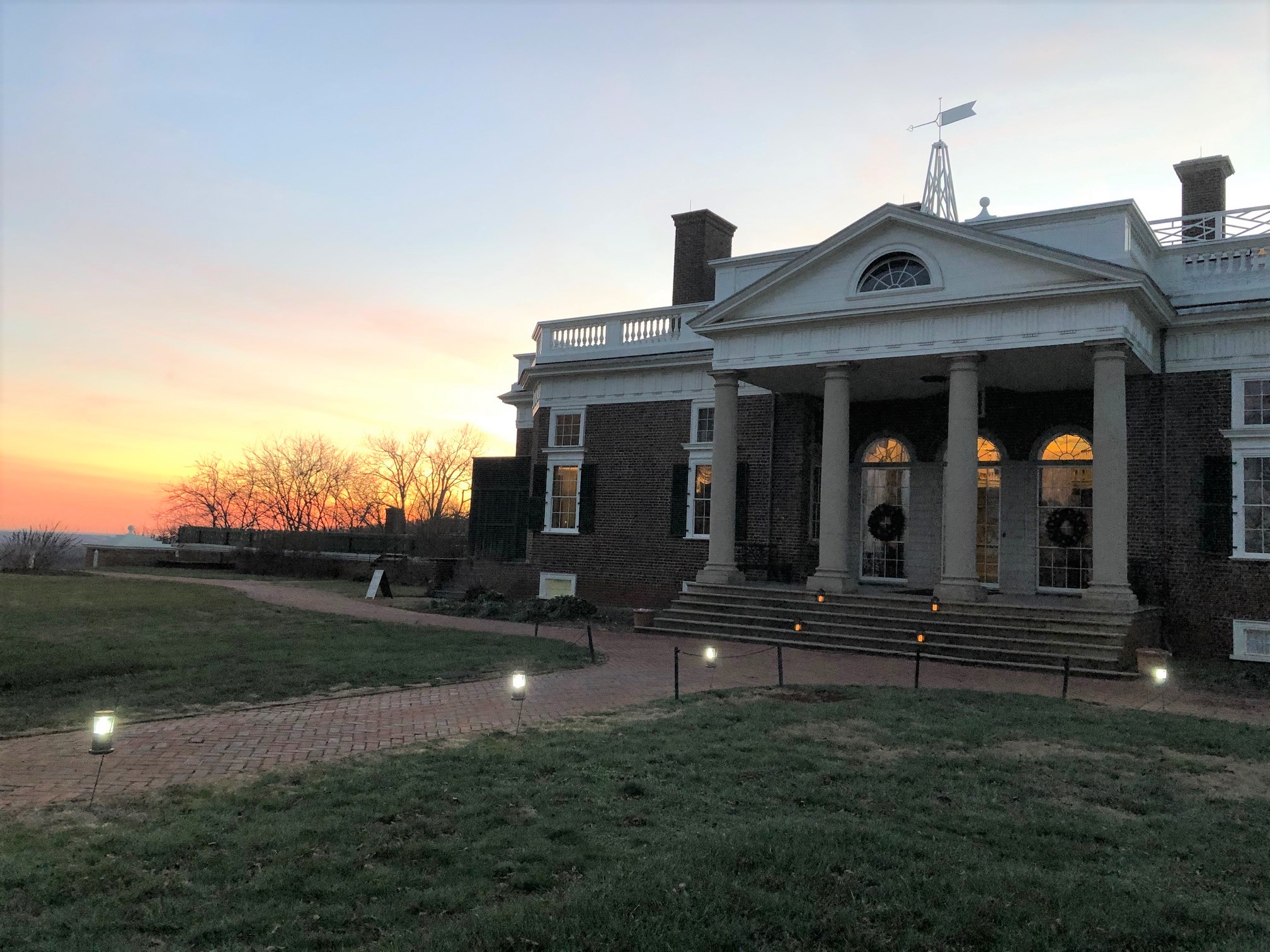 My wife and I had the good fortune to join friends in a “private” tour of Monticello last evening. (Because of COVID, Monticello no longer conducts the traditional tours of 25 or so people per group, so all tours are small and “private.”) It has been a decade or more since I last visited the place, but considerable progress has been made in renovations of the house and grounds. I learned many tidbits about Jefferson that I either never knew or had long forgetten.

As the movement gains momentum to delegitimize the founding fathers, especially slaveholders, T.J. remains a subject of controversy and debate. Accordingly, I report here some of what I learned that might illuminate aspects of that debate.

Indebtedness. Jefferson began construction on Monticello in 1768 on a plantation of 5,000 acres. His first design for the building was, quite frankly, unremarkable. After visiting France, where he was exposed to both classical architectural styles as well as architectural novelties, he totally redesigned the building and scrapped the work that had been done to that point. The result was an architectural masterpiece — and a significant addition to his debt.

It is difficult for people living in 2020 to conceive how different the economic world was 250 years ago. It is widely known that Jefferson amassed great debts over his lifetime. Less widely known is that he had inherited considerable debts from his father-in-law. No one today inherits the obligation to pay off their parents’ debts today (other unless it is secured by specific assets such as houses and cars). Before the American Revolution, however, the mechanisms for inheritance and intergenerational transfer of wealth were rooted in the feudal era. As a Virginia state legislator between 1776 and 1179, Jefferson worked to abolish feudal vestiges such as the doctrine of entail, which dictated that only a property owner’s heirs could inherent his land, and the doctrine of primogeniture, which required that in the absence of a will, a property owner’s oldest son inherited his entire state.

Most of Jefferson’s indebtedness, however, was due to his own extravagance. He purchased the neighboring mountain to preserve what we now might call his “viewshed.” Always hospitable, he entertained an endless stream of guests at considerable expense. His many years of public service diminished the time he could dedicate to the management of his extensive estate of farms and slaves. And even when he did focus on estate management, ever optimistic, he consistently underestimated expenses and overestimated revenues. After Jefferson’s death, his grandson Thomas Jefferson Randolph, shouldered the entire debt load — $107,000, a massive sum in those days — and finally satisfied all creditors 50 years later.

Slaves. Of all of Jefferson’s slaves, the best known is slave Sally Hemings, whom the preponderance of evidence suggests served as his concubine. But two of her brothers reached positions of considerable status within the plantation hierarchy as well.

Sally’s brother James Hemings traveled with Jefferson to France, where he trained as a chef de cuisine. Hemings returned from France, where he was a free man, to continue in Jefferson’s service in Virginia as a slave. Jefferson delegated enormous responsibility to him and gave him great latitude in travel and the handling of money. When Jefferson was away and his services were not needed, Hemings was allowed to hire himself out and keep his wages. In 1796 Jefferson granted Hemings his freedom. They stayed in contact on and off throughout Hemings’ life.

Robert Hemings, brother of Sally and James, served as Jefferson’s  bodyservant and traveled with him everywhere in America. He did not accompany Jefferson to France, however. Instead he found another job as a servant and was allowed to keep his wages for himself. While he enjoyed considerable freedom, Hemings was married to Dolly, a slave woman living near Fredericksburg and Richmond by whom he had two children. After shuttling for years between Monticello and his wife’s residences, he persuaded a Richmond doctor to advance him the purchase price of his freedom, which Hemings agreed to repay with service. Jefferson complied with the agreement, though reluctantly due to the value he placed on Hemings’ service.

Unlike many slave holders, Jefferson encouraged his slaves to learn to read — many received their instruction at Monticello. As a deist affiliated with no religious denomination and a proponent of religious freedom, he granted his slaves freedom of religious conscience, allowing them to worship as they pleased. Whenever he hired white craftsmen and artisans to perform work, he made it a point to require them to train his slaves. When the slaves weren’t working in the wheat fields, they were engaged in small-scale industries such as nail making and textile production as charcoal burners, blacksmiths, house joiners, nail makers, and carpenters. He provided tips and percentages of workshop profits to slaves who maximized efficiency and output.

It in no way condones the institution of slavery to acknowledge that Jefferson, by the standards of his time, was a benign master who endeavored to better the condition of the slaves he owned. True, he manumitted only seven of his slaves, including five at his death, but he was constrained by his massive debts and legal obligations to his debtors. He also endeavored to hold his slave families together, which he largely did until he died. Upon the settlement of his estate, however, nearly everything in Monticello and his plantation was sold off, including 130 slaves, to satisfy creditors. Tragically, many family members were split as they were auctioned off to different bidders.

Slavery was an evil and indefensible institution, as Jefferson himself acknowledged. Looking back from our vantage point today, we rightly condemn that evil. When appraising Jefferson’s role in history, we must acknowledge his participation in an evil institution but also recognize his efforts to rise above it by making the institution less inhumane and articulating the principles of individual liberty that would inspire the movement to abolish slavery altogether.