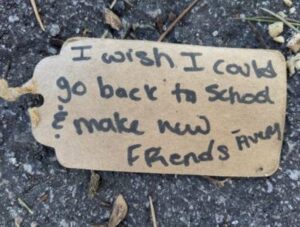 Five days into Joe Biden’s presidency crack New York Times reporters finally discovered what the rest of us with common sense knew almost a year ago: That closing public schools would lead to a mental health crisis among kids that would far outweigh the dangers posed by COVID-19.

Of course The Times reporters knew this months ago. But publishing such heresy might have helped Trump’s re-election, since the president was also calling for schools to reopen. Better to let a few more kids fall into clinical depression than risk THAT.

The Times focused on Clark County, Nevada, the fifth largest school system in the country. The tragic consequences of shuttered schools is not confined to Nevada.

“When we started to see the uptick in children taking their lives, we knew it wasn’t just the Covid numbers we need to look at anymore,” said Jesus Jara, the Clark County superintendent. “We have to find a way to put our hands on our kids, to see them, to look at them. They’ve got to start seeing some movement, some hope.”

Since schools shut their doors in March, an early-warning system that monitors students’ mental health episodes has sent more than 3,100 alerts to district officials, raising alarms about suicidal thoughts, possible self-harm or cries for care. By December, 18 students had taken their own lives…

One student left a note saying he had nothing to look forward to. The youngest student Dr. Jara has lost to suicide was 9.

Virginia Beach School Board member Vicky Manning, who has been a vocal supporter of in-person classes, told me yesterday that two emergency room doctors warned the board that “they have seen a spike in suicidal ideations.”

Yet the schools remain closed, despite recent efforts by the superintendent to relax the COVID metrics that govern reopening.

I recently asked teachers to email me with what they were seeing in their virtual classrooms. I received so many poignant replies that I can’t possibly quote from all of them. Every single teacher who contacted me is eager to get back to class. They are frustrated with the limitations of remote teaching and they’re worried as their students fall hopelessly behind.

Several Virginia Beach middle and high school teachers told me that chronic absenteeism is a huge problem. Upon investigation, however, they say they learned that some of their students were taking care of younger siblings while their parents work all day. Teenagers can’t join their classmates in virtual classrooms when they’re helping their brothers and sisters keep up with their school work.

I hadn’t thought about the many ESL (English as a Second Language) students, but a local teacher of those children related her experience.

Some of my students are from NATO families. They have highly educated parents, have been to the best schools, and have access to the best WiFi. They are fine. They are making straight A’s and learning English at an astonishing rate.

The majority of my students, however, are from Central America. They have parents who work several jobs and are more than likely uneducated. They themselves have often had a spotty education in their home countries, and are not always entirely literate in their native language. Some had never touched a computer before the school issued Chromebooks were handed out in the summer!

As you can imagine, this first term has been rather rocky for them. I just recently, within the past few weeks, have gotten them all proficient with the programs and apps we use on a daily basis. (Can you imagine explaining things like how to download Kami PDF editing software to someone remotely, in a language that you speak only slightly?) Most of them have a terrible WiFi connection if any at all.  I had a girl miss 2 weeks because her Cox cable was cut off and it took a while for the school system to get her set up with a hotspot. …

These students are failing every single subject (except my class). I cannot help them with their work in other classes when I’m not there to see what their assignments are. I can’t make sure they do their assignments. My class is geared toward their needs, but in other content area classes they are just lost. Imagine taking biology or chemistry in a language you don’t speak! I am simultaneously working harder than ever before and not doing nearly enough.

I just want to be able to do my job. The way I see it, I have been in danger of catching diseases all of my career. I’ve had ‘em all from hoof and mouth to strep to pneumonia to every version of stomach and upper respiratory virus that’s out there. My immune system has become pretty darn good at this point. I am not scared to go back, I’m much more afraid of the consequences of not going back.

I have personally had several students reach out to me since September about how sad they are. Some apologizing for not completing assignments because they are so sad that they can’t get out of bed. One student said she was trying to work but couldn’t stop crying. (I hope it goes without saying that I told them they should focus on their mental health without pressure from me or my class.)

Additionally, this first term of the year alone I’ve had over a dozen students miss class due to mental health issues. I’ve had meetings with parents where they are begging the teachers and administration for help. They are worried about their children’s mental health.

The fact of the matter is while our children are falling behind academically that is far from my biggest concern. Our children are suffering. What I think decision makers are missing is the impact that their decisions are having on people’s mental health.

My mental health has suffered so greatly that I’ve had so go on anxiety/depression medication and seek professional help. Teachers don’t enter the profession because they like isolation. Teachers like being around people! We love our students. We care for our students emotionally and mentally. (Yes, even in high school). The way I miss students I barely know is soul crushing.

My biggest question in all of this is when does it end?

Here’s an email that especially touched me:

I became a teacher because at one point, I loved the content and the smell of a new novel and the way it felt to string words together and make a sentence.  I had a lofty goal that I could somehow make kids fall in love with reading and writing and that they would leave my class and love The Catcher in the Rye as much as I do.

I am not going to lie and tell you it ever really happened, although I did make a valiant attempt and it’s possible there are some students who got a book in their hand that they actually liked and enjoyed reading.  Somewhere along the way, in classrooms full of kids just like me and not like me at all, I fell in love with students.

I began to care less about content – that matters, sure – and I began to care about all of the building blocks that make each student unique.  As a high school teacher, a lot of the blocks had already been built, and most of the students hated reading or hated school or just hated life in general.  Some made my job very hard – I loved them anyway.

They were a rag-tag bunch, coming from some of the lowest income parts of the city.  They were overlooked, unappreciated, mouthy, and unloved – except by me and I’m sure a handful of other teachers.  In my classroom, they found a space where they could just be accepted and seen for the beautiful people they were.  I can’t share their stories, as they are theirs to tell, but I promise they would break your heart.  Homeless, nursing dying parents, raising siblings and their own babies, escaping abuse, and looking for a place to be loved when their parents didn’t want them anymore – it was all there in those four walls.  Someone asked me recently, if my students were to say one thing about me, what would it be?  I believe they would say that I loved them – and for me, that will always be enough.

I worry about them every day.  I try to make it the same – virtually – but it’s not.  I can’t see their faces, I can’t hear their voices, and I mostly feel like I am talking to myself – is my microphone even on?  Some days they show up, and some days they don’t, but they are never engaged.

Have you ever been on a Zoom meeting for an hour?  How about 6 hours?  How can we call this education?  Anyone who works in education knows that the most important part – the most essential part – is forming a relationship with your students and getting to know them as people.  All of education builds from there, so how are we building anything at all?

I am being kept from working and doing the job that I love.  Somewhere along the way, it was decided it is too dangerous and now we are all sinking online.  Please do not tell me that we will “catch them up later” – for these juniors and seniors, there is no later.  Please do not tell me “we are all in the same boat” because most of my students don’t even have a boat and they certainly lack oars to push themselves along.  When did education not become essential?

Schools are essential to students – students should be made the priority and instead they are being left with no choice except to stare at a screen all day.  Even the governor recognizes that this is not education because although we have enough hours to count as “seat-time” he is exploring year round school.  If virtual is the same quality, why do we need year round school? Make no mistake, virtual learning will leave lasting effects on the students of this city, and those who are most vulnerable will feel the effects for generations.

A friend of mine was walking by “The Wishing Tree” on Redgate Avenue in Norfolk last week when he spied a paper wish on the ground.

“I wish I could go back to school & make new friends. Avery.”

Enough. It shouldn’t take a rash of suicides to realize that what’s happening all over the country is widespread child abuse.

Do it for all of the Averys out there.

This column has been published with permission from Kerry: Unemployed & Unedited.