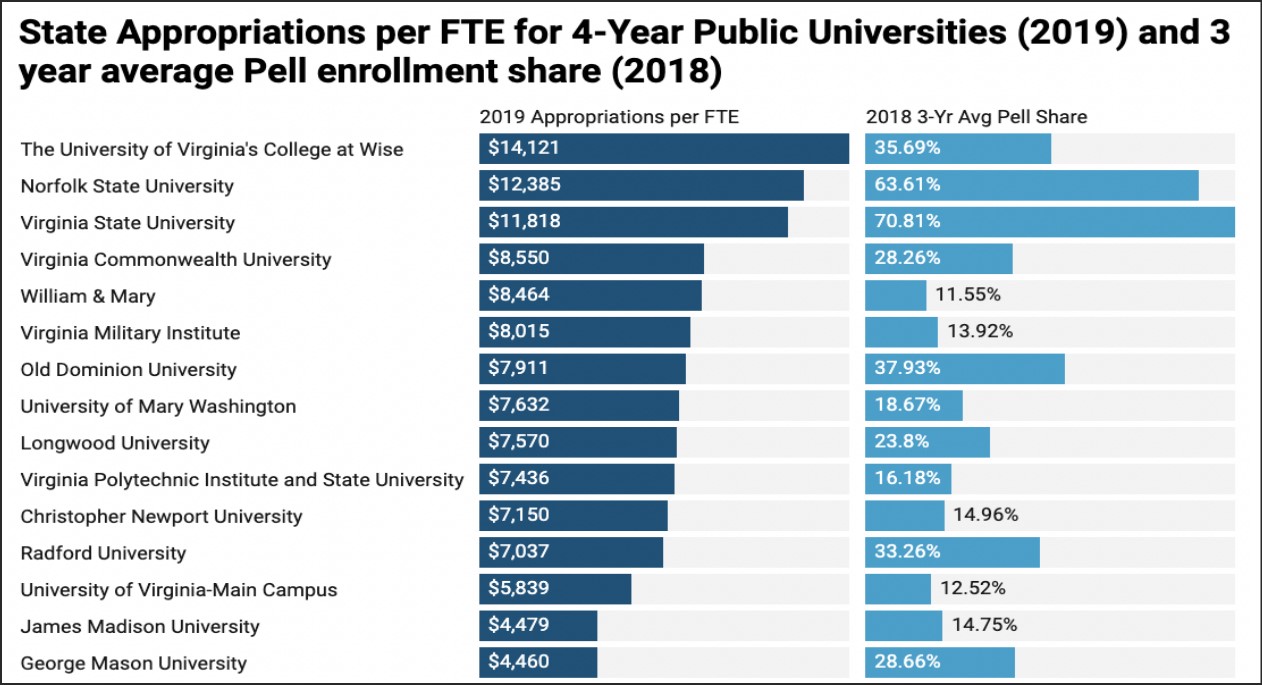 State appropriations per student to Virginia’s four-year colleges and universities vary widely, ranging from $14,121 in FY 2019 for the University of Virginia’s College at Wise to $4,460 at George Mason University, according to a recent report, “Higher Education School Finance Inequity and Inadequacy in Virginia.”

Not only is state funding per full-time student lower than in most other states, argues the report, published by left-leaning Education Reform Now (ERN), state support does not appear to be linked to need, access, affordability, or success.

ERN’s social-justice critique of Virginia’s higher-ed system contends that state funding short-changes lower-income and minority students. Some points it makes are valid. Some are tendentious.

ERN argues that it’s not enough to recruit a more racially diverse pool of applicants, which Virginia’s higher-ed system has done. It’s not even enough to make funding “equal” for lower-income and minority students, meaning that individuals of all races receive the same level of state support on average. ERN says Virginia should make its funding “equitable,” meaning that funding should be allocated in such a way as to favor lower-income and minority students. In effect, in ERN’s eyes, the greatest flaw of Virginia’s higher-ed system is that it does not function sufficiently as an engine of wealth redistribution and social mobility for the poor.

The report cherry picks data to exaggerate the extent to which the system is inequitable. For example, the report emphasizes the large debt load carried by graduates of Virginia’s two Historically Black Colleges and Universities (HBCUs), Norfolk State and Virginia State. A quarter of their graduates owed more than $54,000 in 2018. In that discussion, the authors overlooked the data found elsewhere in the report that NSU received the second-largest appropriation per capita ($12,385) of any four-year institution, and VSU received the third largest ($11,818). The only institution receiving more was UVa’s college at Wise ($14,121), which serves the state’s poorest region, far Southwest Virginia in Appalachia. HBCU students graduate with high debt loads not because they are Black or because the state short-changes their schools’ funding but because (1) HBCU students are far more likely to come from poor families and (2) HBCUs lack the market power to jack up tuition for wealthier students in order to lower tuition for others.

In point of fact, Virginia’s system is “equitable,” if by equitable we mean financially favoring lower-income students. It just isn’t equitable enough to suit ERN.

The report notes that the College of William & Mary, one of Virginia’s academically elite institutions, heavily discounts tuition and fees for students from lower-income and working-class families — charging only $4,711 compared to $11,060 for the full sticker-price paid by more affluent families. But the authors then write, “One should not rush to applaud William & Mary, however, on affordability for low-income students.” W&M, it seems, admits “too few” low-income students.

The real sin of UVa and W&M — Virginia’s two most elite academic institutions — is that they have not lowered their standards so more lower-income/minority students can qualify to attend. The reality is that a shamefully small percentage of minority students graduating from Virginia high schools are prepared to do elite college-level work. While ERN does not explicitly say the elite institutions should lower academic standards, that would be the only way to meet its social-justice goals.

ERN fails to grasp that UVa and W&M (and Virginia Tech, the state’s third elite university) don’t stand alone. They are part of a comprehensive system of higher-education designed to accommodate students of widely varying levels of academic preparation. The idea is to have a handful of institutions that provide a world-class education for those who are academically prepared to benefit from it, while other institutions serve less blessed segments of the higher-ed marketplace.

But the ERN report is right about one thing. The level of state support does vary widely between institutions. There’s an easy way to solve the resulting inequities. State dollars should flow directly to students, not to institutions. Empower students financially and let Virginia universities compete for their business. I suspect we’d all be amazed at how those institutions would focus on cutting costs and hewing to their core educational mission. Lower-income students would get equal financial treatment, regardless of the institution they attend. Best of all, all students — rich, poor, middle-class alike — would benefit.