Is the VMFA Aligning with the Left in America’s Culture Wars? 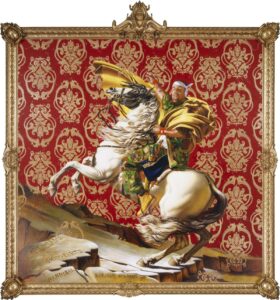 Kehinde Wiley is unquestionably a very talented artist. His mastery of painting is abundantly visible in his renderings of African-Americans in contemporary garb posing in the style of European masterpieces such as Jacques-Louis David’s “Napoleon Crossing the Alps” (as seen to the right). Inspired by the debate over Civil War statues, Wiley will display in New York this September a monumental statue of a young African-American in urban street-wear sitting astride a horse in a pose reminiscent of Richmond’s J.E.B. Stuart monument. In December, the statue will be installed in front of the Virginia Museum of Fine Arts on Arthur Ashe Boulevard — about a mile from the Stuart statue. According to the Richmond Times-Dispatch, the Wiley statue will be the most expensive acquisition made in the museum’s history.

I don’t have a problem with either Wiley or his creation. Wiley is exercising his right to free expression. His work shatters stereotypes and provokes thought. His work displays a mastery of technique, unlike much of the trash that passes for contemporary “art” in museums today. Further, he’s not tearing down or vandalizing Richmond’s Civil War statues; he’s mocking them. I don’t even have a problem with the VMFA displaying the controversial, in-your-face piece outside the museum. I appreciate a diversity of artistic viewpoints and perspectives.

Rather, I see the VMFA’s huge investment in Wiley’s artwork as a sign that the state museum has taken sides in the nation’s culture wars. Indeed, I would go one step further in suggesting that the museum sector in Richmond is being increasingly captured by political progressives and weaponized to challenge — even to assault — the values and beliefs of a large segment of the population. I will develop this theme in future posts. Meanwhile, back to the VMFA…

Hear Valerie Cassel Oliver, the museum’s curator of modern and contemporary art. “His works builds on the iconography of power — how individuals are memorialized and edified. He wanted to take what he does in the two-dimensional form and take it to the next level. … It just seemed to be the right place to expand the conversation about monuments and who gets memorialized.”

If Oliver were interested in “expanding the conversation” to reflect a diversity of viewpoints rather than just progressive viewpoints, I would find no cause for concern. I believe in a vibrant marketplace of ideas. What worries me is that the “conversation” will “expand” only one set of perspectives.

The VMFA, the RTD informs us, has set the goal of becoming one of the top three museums in the world for African-American art. I would expect any museum to include art by African-Americans. But I fear that the prioritizing of African-American art will be accompanied by the mumbo jumbo of identity politics — defining people (and artists) by race, gender, and class — and used to nurture grievances, victimhood and a Leftist political agenda. Perhaps I’m been rendered excessively sensitive by exposure to the caustic influence of movies, television and media. It will be interesting to see how far the state-supported VFMA — $42 million in state appropriations this year — takes this.

16 responses to “Is the VMFA Aligning with the Left in America’s Culture Wars?”