Is a COVID Surge Coming in October? 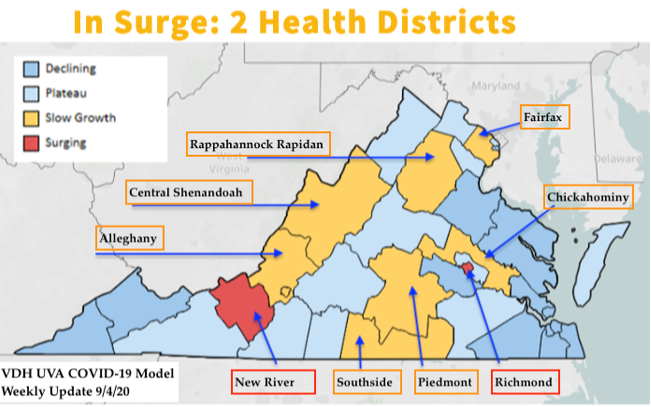 Statewide, the R0 (R-naught) value for COVID-19 moved up to 1.004 because of surges in the Near Southwest and Northwest for the week ending August 22, according to the Virginia Department of Health’s latest COVID-19 Model Weekly Update. If the RO is above 1, it indicates the potential for exponential increases in the spread of a disease.

The red areas on the map show surging hot spots in the New River and Richmond City Health Districts. Seven slow-growth areas are in deep yellow and declining numbers are the deeper blue. VDH offers no explanation for why the Eastern Region districts are all declining or for the plateau for the remaining districts.

The model projects about 78,000 new cases by Thanksgiving, with a peak of 8,300 cases during the week ending October 18th. The report says that seasonal changes like schools reopening, flu season and changing weather patterns could increase the weekly case numbers, too. Adding in a possible 10% to 20% increase in cases after Labor Day, the model forecast jumps to 11,000 to 14,000 for the week ending October 25th.

NBC12 reported 90 active cases of at least 150 total at Virginia Commonwealth University (VCU) in the Richmond City Health District on September 1. Virginia Tech in the New River Health District has a COVID Dashboard shows 238 cases for last week and a total of 416 employee and student cases since August 16.

On September 5, Richmond.com reported 650 active cases at James Madison University. Harrisonburg is in the Central Shenandoah Health District and was showing increasing cases in August.

The University of Virginia (UVA) in the Thomas Jefferson Health District, Northwest region, has a COVID tracker that lists 103 students and 111 staff cases since August 31. UVA shows 413 total cases since August 17  that would not be indicated yet on the UVA Model map above.

Oddly though, with more than 1,600 cases in just four universities since mid-August, the VDH Outbreaks tab on the Daily Dashboard shows only 409 cases reported as of September 8 in educational facilities (a category that includes day care, K-12, and colleges).

10 responses to “Is a COVID Surge Coming in October?”