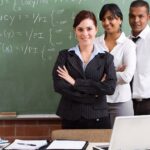 This is the ninth in a series of articles about Virginia’s Standard of Learning assessments.

A measure that has gained some credibility among psychologists is the Intelligence Quotient (IQ). IQ scores tell us nothing about someone’s intrinsic worth as a human being or their rights to equal justice under the law. On the other hand, most folks would agree that IQ does measure something real. Not every human being is capable of becoming a brain surgeon.

Whatever your opinions about the validity and usefulness of the IQ metric, it is important when thinking about educational policy in Virginia to understand that it does not measure the same thing as the state’s Standards of Learning (SOLs). SOLs are “criterion referenced” tests — that is, they measure how well students have mastered skills and content taught in schools, not their capacity to learn.

Let’s consider an extreme case, students with intellectual disabilities (ID). This group is a small subset of the population with disabilities subgroup that receive special education services under the federal Individuals with Disabilities Act. In Virginia, students with an IQ of two standard deviations below the mean (meaning 70 on an IQ test where the mean is 100) and exhibit significantly impaired adaptive skills are identified as Intellectually Disabled (page 38). In 2019 there were 8,740 students with this label out of more than 1.2 million students in Virginia.

For the purpose of this essay, all SOL data are from the 2018-2019 school year. This was the last year in which SOL tests were administered prior to the COVID pandemic. As was discussed in the “How COVID School Closures Impacted SOL Test Scores” essay, our educational response to the pandemic as a state and the variation of responses among the divisions significantly skewed the SOL data. In an effort to simplify this topic, we’ll focus on the more reliable, pre-pandemic data.

In 2019, the SOL pass rates in Math for students with intellectual disabilities in Virginia was 11.1%. Given the small number of students (tested student populations of less than 50 students are suppressed in the public SOL reports) VDOE published only division-level data for this subset of the SPED subgroup of fourteen divisions. Those pass rates ranged from 1.32% to 42.5% (Wise County), with only five divisions scoring in the double digits. In fact, Wise’s pass rate for this subset of students was within ten points of the OVERALL (all students) math pass rates for three divisions that same year.

When folks think of measures of score distributions (grades, IQ, etc), they typically think of a Bell curve. Quite often, that is how scores are distributed. However, it’s not helpful to think of proficiency in similar terms.

Proficiency on the SOL test is an arbitrary level of performance assigned by the Virginia Board of Education. If students score above that point, they pass and are considered at least proficient. Those scoring below that point fail and are not considered proficient. Cut scores for proficiency are scaled for each SOL test so that students who score at least 400 pass.

Figure 1 below illustrates the normal distributions of the 2019 Math 3 SOL results for all 8143 students in our CIP consortium who took that test. In a Bell curve, 95% of the results fall within plus/minus two standard deviations (SD) of the mean. In this instance, the mean score was 446, and 95% of the students’ scores ranged from 390 to 558. 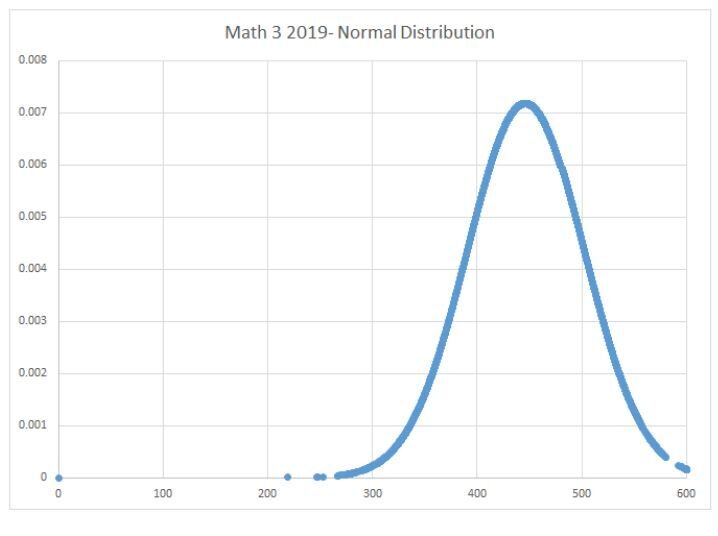 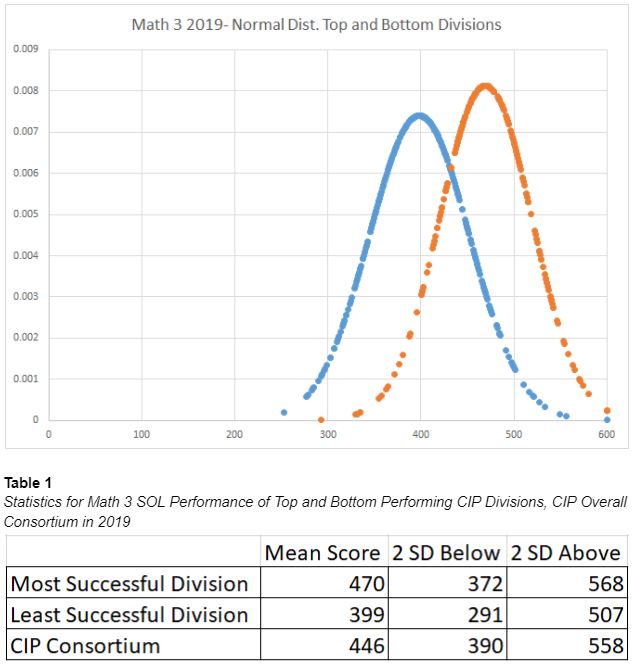 This difference is due to the instructional programs in those divisions. It’s what the adults are doing, not the kids they get. Individual kids scores do fall along a bell curve, but the proficiency line is at a different point on each division’s bell curve. There is no indication that some students are doomed to fail simply because of any circumstance inherent within those children. The biggest factor which impacts their proficiency outcomes are what the adults in their schools do with them.