In Praise of Trailer Parks 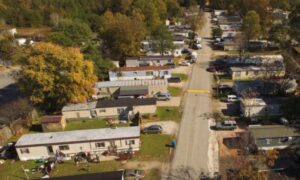 Nobody knows for sure how many trailer parks there are in Virginia, and Del. Paul Krizek, D-Fairfax, wants to find answers. He has introduced a budget amendment to establish a Virginia Manufactured Home Park registry, to be funded with a $100 database maintenance fee from each mobile home park.

Krizek regards trailer parks as a rare form of affordable housing in the state, and he’s concerned that market forces could put them out of business. Many were built long ago on land that was inexpensive at the time but due to the evolution of real estate markets has become desirable.

“The biggest problem is that the land is so valuable,” Krizek told The Virginia Mercury. “These parks are a gold mine for someone who wants to come in and build a 20-story apartment complex. I understand the need for density, but it’s sad when one of these communities goes away because they have been there for 20-30 years.”

There are two important lessons to be derived from the Mercury’s trailer-park story. They’re not new to readers of Bacon’s Rebellion because we have been pounding the table on these issues for years. But it’s heartening to see a second journalistic voice making the same points.

First, manufactured housing is a source of quality affordable housing. Second, zoning is the biggest obstacle to building more trailer parks. Remarkably, the left-of-center Mercury quotes an academic expert from the market-oriented Mercatus Center at George Mason University. Trailer parks and manufactured housing may be an area where the interests of social-justice Democrats and free-market Republicans can converge.

Trailer parks have a bad reputation dating back to the early days of manufactured housing, but quality and standards have increased remarkably since then. Indeed, most “mobile homes” are not mobile anymore. They don’t have wheels. The Mercury cites an article in Strong Towns, “Reclaiming ‘Redneck’ Urbanism: What Urban Planners can Learn from Trailer Parks.” Author Nolan Gray with the Mercatus Center notes that the average manufactured house costs $64,000 compared to $324,000 for the average site-built, single family house. Manufactured homes are energy efficient and produce less waste. Combined mortgage payments on an after-market trailer and park rent can be as low as $300 to $500 in some places. The cost of a new trailer might run between $700 and $1,000 a month.

Compare that to the cost of government-sponsored “affordable housing” apartment projects that cost in the realm of $250,000 per unit to build in Richmond and $350,000 in Northern Virginia.

One reason the cost of land is low is that trailer parks allow density. The houses are packed tightly together, and parcels are small — far smaller, typically, than lots in neighborhoods of single-family-dwellings where zoning mandates large minimum lot sizes.

Trailer parks are a significant source of affordable housing — and they don’t require government subsidies. But zoning policies in Virginia are not helpful. Residents of more affluent subdivisions don’t like having trailer parks nearby, and zoning codes and comprehensive plans give them tools to keep them out. Writes the Mercury:

Building new mobile home parks, however, can be a near-impossible task under some local zoning laws, many of which have been rewritten over the last few decades to include lower densities, larger setbacks and street circulation requirements that make new parks cost-prohibitive. To get around the new rules and develop a classic layout mobile home park necessitates a special-use permit — an onerous process involving a public review, the local planning commission and city council or the board of supervisors, none of which tend to be keen on new trailer parks. Existing parks have been grandfathered in, but the updated zoning ordinances bar them from adding new homes lest the entire park be brought up to the new code.

There doesn’t seem to be much appetite for tackling the zoning laws. But last year, Krizek got a bill passed that provided trailer-park residents some protection from eviction. Owners must provide tenants 180 day’s notice if their park is to be redeveloped, as well as money to help cover relocation expenses — $3,000 for Northern Virginia residents and $2,000 in the rest of the state.

Meanwhile,  Jonathan Knopf, executive director of the Manufactured Home Community Coalition of Virginia, is working to allow trailer park residents to create a cooperative ownership model, which would allow tenants to band together, purchase, and manage communities themselves.

Gray with the Mercatus Center argues that a secondary benefit of trailer parks is “private governance.” Park management provides order with the park, upholds basic standards on cleanliness and maintenance, deals with unwanted visitors, and settles disputes among neighbors. If the residents themselves make the rules and enforce them, as Knopf envisions, trailer parks become a mechanism for lower-income Virginians to build social capital as well as financial equity.

This entry was posted in Housing, Poverty & income gap, Regulation and tagged James A. Bacon. Bookmark the permalink.