I Miss The GOP That Welcomed Bob Calhoun 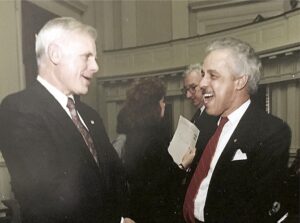 The late Senator Bob Calhoun, R-Alexandria, with the very much still alive and kicking former Governor Douglas Wilder, in the Senate Chamber. Wilder might have been lieutenant governor at the time. Calhoun family photo attached to the obituary linked below.

Former State Senator Bob Calhoun’s death on August 6 at age 83 is apparently only Alexandria local news so far, but he was such a colorful and useful member of the Senate that his passing needs more notice. The family is delaying any formal memorial services.

Calhoun was funny, one very smart lawyer and an experienced government mandarin from the federal realm.  His expertise included transportation. He had a strong political base in Alexandria as councilman and then vice mayor, and when former Senator Wiley Mitchell told us he was stepping down, he strongly pointed to Bob as the next candidate. In his usual fashion I think he called me at the GOP Caucus office and said, “Bob or else.”

Bob was not cut from a very conservative mold on many issues, and that’s why his service is worth noting. All agree he would never get a Republican nomination today, too many preferring ideological purity in obvious losers. But no other Republican could have won that seat, even in the late 1980s. He fit that city’s culture, attitudes and temperament, yet on many issues was a reliable caucus vote. Not all. But he couldn’t always vote against his district. Today’s GOP would inspire a movie called “The Unforgiving.”

The Democrats were so overconfident in victory by former Del. Marian Van Landingham, a delightful and impressive lady I also miss, they ignored Bob’s campaign. All the Democratic energy was focused on who would next run for her “open” seat, which didn’t open after all. It was a wonderful example of what not to do, an example learned by some but not all. Any attacks on Bob as a radical Republican were laughed off by those who knew him well.

As noted, the Democrats didn’t underestimate Bob again, but it took them two tries to vote him out with Patsy Ticer, also a former mayor, in 1995. When we saw Mary Sue Terry’s 1993 gubernatorial vote in that district, the outcome was not in doubt (remember, 1991 was when the Democrats drew maps.)

In the photo background above is former Democratic State Senator Joe Gartlan, another seriously bright guy and a key member of that party’s leadership. He, too, would never get nominated today because he was 100% pro-life and noisy about it. The small tent constrains both parties. For that matter, how would Governor Douglas Wilder fare in today’s environment? We backed him more often than you’d believe.

Forgive the trip down nostalgia lane, but we have lost something in our quest for ideological purity not tempered by humor and compassion, and it is nice to remember better times and the bigger tent. It is not just my aging brain; it was better times. May they come again.