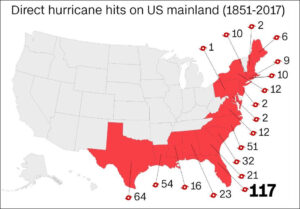 According to what the nation’s ruling elites tell us is the climate-change consensus, a warming climate increases the frequency and intensity of hurricanes. “Because global warming is intensifying, scientists expect the number of extreme storms to continue rising,” writes David Leonhardt, a New York Times opinion columnist.

One would think, then, that this insight would inform the remedies proposed for climate change, such as re-engineering the nation’s electric grid to rely almost exclusively upon wind and solar power. If the frequency and intensity of hurricanes is increasing, it would be appropriate to ask here in Virginia, what standards do we have in place for the construction of wind turbines and solar panels to ensure that they can withstand hurricane-force winds?

North Carolina had a recent opportunity to observe the interaction of hurricanes and solar panels. Hurricane Dorian pummeled the Tarheel state last month, striking solar a solar farm in Currituck County with wind speeds near 60 miles per hour. The solar arrays are supposed to withstand wind speeds of up to 120 miles per hour. How did they hold up?

Hurricane Dorian winds mangled dozens of solar panels and their metal frames at a site in Grandy, raising fears among neighbors that sharp pieces could fly into yards and homes.

Carolyn and Steven Brown recorded from their dining room window a metal rack of solar panels violently rocking up and down during the storm. The panels are only about 350 feet away.

“It looked like waves on the water,” Steven Brown said. “What would have happened if we had a direct hit?”

County officials inspected the site after the storm and found dozens of broken panels and bent metal racks. Some distorted metal pieces can be seen sticking up in the air from U.S. 158 in Grandy. …

The solar array sits on 101 acres of what once was a golf course surrounded by homes and businesses. More than 55,000 solar panels, each a little smaller than a sheet of plywood, are fastened to long rows of metal racks. The project was still under construction when Dorian hit. …

As the solar panels flopped in the wind, the Browns worried pieces might fly off and hit their home.

Opponents of the solar farm warned that panels might become projectiles — as, perhaps, they would have had Hurricane Dorian been more violent.

Bacon’s bottom line: There are two layers of concern. The first is that expressed by the Browns, in which high winds might rip the solar panels off their metal racks and turn them into projectiles. The second is the grid-wide perspective of what would happen if a Class 4 or Class 5 hurricane wiped out entire solar farms and wind farms?

In a grid with a mix of energy sources, including nuclear and natural gas, there isn’t much to worry about. However, in a zero-carbon grid, which Gov. Ralph Northam has called for by 2050, Virginians would be far more exposed to the devastation of a hurricane. Indeed, they would be exceedingly vulnerable if, as some environmentalists have called for, licenses on the state’s nuclear power plants are allowed to expire.

Although Dominion Energy is building a “demonstration” wind turbine project off the coast of Virginia Beach, it will be in commission only two or three years before the utility starts building a massive wind farm that will supply much of the electricity to Virginia’s Tidewater region. While the various parties involved with the wind project are confident that facility will do just fine, we won’t know for certain how the giant turbines will hold up unless a hurricane cooperates and strikes the Virginia coast within that narrow two- to three-year time frame.

In the meantime, Virginia should be learning what it can from North Carolina’s experience with solar panels — as in, sending knowledgeable people down to Currituck County to examine first-hand what happened and to ascertain whether the county’s construction standards are adequate for Virginia conditions. If we really believe that hurricanes pose an ever-increasing threat, as the New York Times tells us we must, we should take seriously the risk that hurricanes could disrupt the electric grid.

In the mind of environmentalists who believe that climate change represents an existential threat to the planet, Virginia’s power companies are dragging their feet in deploying renewable energy resources. The stakes are so high and the need so urgent that the climate crisis calls for a “Damn the torpedoes, full speed ahead” approach. To those of us who believe that the planet is warming but don’t see humanity in peril of extinction, the situation calls for a measure of prudence. By all means, let’s move toward a clean, renewable grid. But let us also recognize that the 21st-century civilization collapses without electricity and that the reliability and resiliency of the grid is likewise a societal imperative.

This entry was posted in Disasters and disaster preparedness, Energy and tagged James A. Bacon, Solar energy, Wind power. Bookmark the permalink.