How to Build a Village 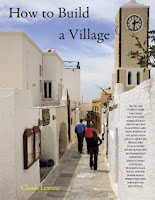 Claude Lewenz, an American-turned Kiwi, has written a fascinating book, “How to Build a Village,” in which he envisions how to build a small community — a “village” of some 5,000 to 10,000 people — that is prosperous, environmentally sustainable and enables a high quality of life. On Waiheke Island, outside Auckland, on the far side of the world, Lewenz has elaborated many of the same principles propounded on this blog. He offers a capitalist, market-driven alternative to Business As Usual.

The central feature of the Lewenzian village is this: It has no cars or trucks. Within the village perimeter, people get about by walking, bicycling or using small electric vehicles. To many, the idea will sound ludicrous. But drawing upon real-world examples of Medieval Italian cities and Greek island villages, Lewenz makes an intriguing case. He would organize his villages around Italianate plazas and link them with pedestrian streets and lanes of various widths; cars, to be used only for travel outside the village, would be banished to a garage on the village edge.

The scheme would work because getting rid of the cars eliminates the need for the vast apparatus of streets, highways and parking lots that consume so much urban space. As a result, everything is closer together. Thus, trips are shorter. (As a bonus, Lewenz envisions using the savings in asphalt to invest in underground utilities, recycling and waste systems, organizing and promoting locally grown foods, and other village enterprises.)

While Lewenz sees his village located in the countryside, demarcated by a village wall from the fields and woods (what Ed Risse would call a “clear edge”), he acknowledges that variations of the auto-free zone could be applied in urban environments through in-fill and re-development projects. Just imagine the impact in Virginia if our major metropolitan areas developed strings of car-free villages, linked by arterial roads and mass transit, in which some 50 percent to 80 percent of all “trips” took place on foot or on bicycle.

As Lewenz notes, America already has large car-free zones. We just don’t realize it. We cover them with roofs and call them malls. We just need to make them bigger: integrating shops with houses, offices, public buildings and other amenities…. and removing the roof.

In “First, Shoot All the Cars,” I focus mainly on how a Lewenzian village would function without cars, but I allude to many of his other ideas for building more livable, sustainable communities. If you find the column intriguing, buy the book. It is lavishly illustrated with color photographs from Lewenz’s travels around the world — well worth the hefty purchase price.

This entry was posted in Land use & development, Transportation. Bookmark the permalink.