How Influence Is Played in Richmond 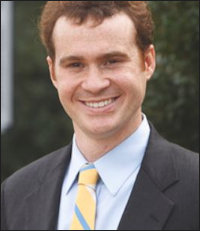 It helps to have an influential father, especially if you are Peter Farrell.

The 36 year-old former Republican delegate and financial investor has been named to the Board of Visitors of Virginia Commonwealth University by Gov. Ralph Northam.

Northam, a Democrat, has accepted thousands of dollars in political donations from Thomas Farrell, Peter’s father, who heads Dominion Energy, which has also contributed to Northam.

There’s nothing especially wrong with young Farrell’s appointment although his age and relative inexperience might raise eyebrows. He served in the House of Delegates from Henrico County from 2012 to 2018 when he said he wanted to “retire” to spend more time with his family and investment business.

But there’s always been a whiff of inside baseball with him. According to a 2016 book by Richmond author Jeff Thomas, the way was cleared for Farrell’s ascendance into politics literally behind closed doors.

In 2011, political veteran Bill Janis, then the Republican delegate from the district, decided to resign so he could run for commonwealth’s attorney in Henrico. Six other Republicans threw their hats in the ring. Among them were Dave Brat, a local economics professor, and Peter Farrell, listed as an “amateur thespian.”

The candidate was decided by a four-person GOP panel. The choice was Farrell. Reportedly, the coziness of the decision enraged Brat so much that he ran for Congress next year against Eric Cantor, a fair-haired boy from the Richmond establishment who was in the running to be Speaker of the House.

Brat hit a sensitive nerve. Cantor had been badly alienating his constituents but didn’t seem to realize it. When Brat won with Tea Parry help, it made national news. In 2018, Brat had followed too closely in Cantor’s footsteps by ignoring voters and was ousted by Abigail Spanberger, a young former covert officer from the CIA.

Peter Farrell, meanwhile, worked in the House and appeared in a movie that was put together by (curiously) his father, the head of the power company. The “Field of Lost Shoes” about a group of Virginia Military Institute cadets during the Civil War. Farrell played a Union officer.

That might seem like a fun and worthy thing to do, but there was a hitch. The Farrells drew a fair amount of criticism because the film got a $200,000 grant from the state. Tom Farrell is one of the highest earning corporate executives in the country. It’s not as if he seems to be lacking for funds.

Peter Farrell does seem to have many close ties to VCU. He went Collegiate, an elite, private prep school in Richmond, and then the University of Virginia.

There are other links to powerful people. Richard Cullen of the white shoe McGuire Woods law firm is a family relative. Michael Rao, president of VCU, is a public supporter of a huge private downtown project headed by Tom Farrell. Dominion buildings would be included in a special tax zone to help fund it but that’s another story.

Stay tuned for the next edition of “As Richmond Turns.”

This entry was posted in Politics, Uncategorized and tagged Peter Galuszka. Bookmark the permalink.