How Fair Is Virginia’s System for Distributing Vaccines? 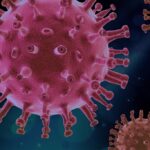 Virginia has done a much better job in recent days in administering the COVID-19 vaccine. Out the nearly 1.4 million vaccine doses received from the federal government, according to the Becker Hospital Review, 68.7% have been given as shots. But the criteria for distributing the vaccine within the state has not been clear.

According to data published yesterday on the Virginia Department of Health COVID-19 dashboard, vaccines have been distributed unevenly across the state. At one extreme, the Norfolk Health District has received 81,300 doses. Using the VDH’s population estimates for its health districts, that translates into 33.2 vaccines delivered for every 100 population.

At the opposite end of the scale, the Hampton Health District has received only 7,075 doses, or 5.2 doses per 100 population.

“Vaccine distribution within the Commonwealth is opaque,” wrote Virginia Beach City Manager Patrick Duhaney in an email that a third party shared with Bacon’s Rebellion. “[I] cannot find anything that talks in any manner as to the decision process of who gets what percentage of vaccine received from the Federal Supply Chain and who/how those decisions are made.”

Virginia Beach government officials are miffed. Virginia’s most populous city had received only 30,300 doses by yesterday, according to VDH data, or 6.7 doses per 100 people — second worst among all health districts.

Virginia Beach elected officials from Mayor Bobby Dyer to state Sen. Bill DeSteph, R-Virginia Beach have bombarded Governor Ralph Northam with missives decrying the inequitable distribution. In one letter, DeSteph not only criticized Northam for the slow start to Virginia’s vaccination eff0rt — the state ranked 48th in the country at the time he wrote the letter before climbing to 10th in the percentage of doses administered today — he said that he was “outraged” by the disrespectful treatment the Northam team extended Mayor Dyer and city councilmen.

The Northam team, in turn, contends that measuring doses delivered as a percentage of population is not a meaningful metric of the state’s current priorities. The emphasis of the initial rollout was to distribute vaccines to hospital systems to vaccinate front-line medical personnel. Therefore, large medical centers such as Sentara, based in Norfolk, received disproportionate share.

“The vaccine received by geography is consistent with hubs for these large healthcare systems, where the doses were shipped and presumably redistributed at their discretion throughout their system (affiliated hospitals or medical practices),” responded the Virginia Department of Health in an email to Virginia Beach Councilman Guy Tower. If Virginia Beach ranks low on the list for distributed vaccines, it’s because the city does not have a major medical center.

A far better measure, VDH responded, was to measure where the vaccine doses were administered. Using that measure, 48,129 Virginia Beach residents have been vaccinated — a rate of per 100,000. That’s actually higher than for Norfolk, where the vaccination rate is only 7,029 per 100,000.

So, who’s right? Before receiving copies of this correspondence, I was asking the same questions as Virginia Beach officials. Focusing on the VDH vaccination distribution data, I observed that the vaccines were being distributed incredibly inequitably from a geographic perspective. This VDH map shows the variance between health districts.

(My approach was similar to the one cited in Duhaney’s email, which calculated the Relative Equivalence Value (REV). At the time he was writing, the federal government had delivered doses equivalent to 15.9% of Virginia’s population. REV calculated deviations from that baseline. Thus, Alexandria came in at 31% below the statewide average, and Chesterfield County 8% above. Virginia Beach was 64% below the baseline.) 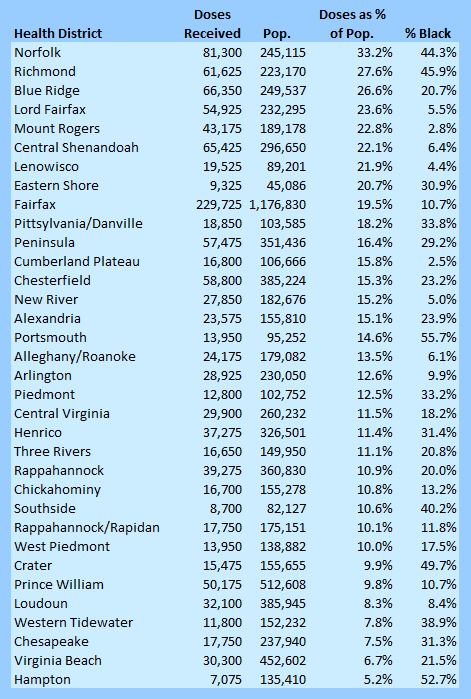 I try to adopt a social scientific approach when conjecturing about cause and effect. I hypothesized that the Northam administration distributed doses with an eye to favoring African-American populations, perhaps on the grounds that African-Americans are more likely to contract the COVID-19 virus. I then plotted a graph showing the relationship between doses distributed and African-Americans in the population. 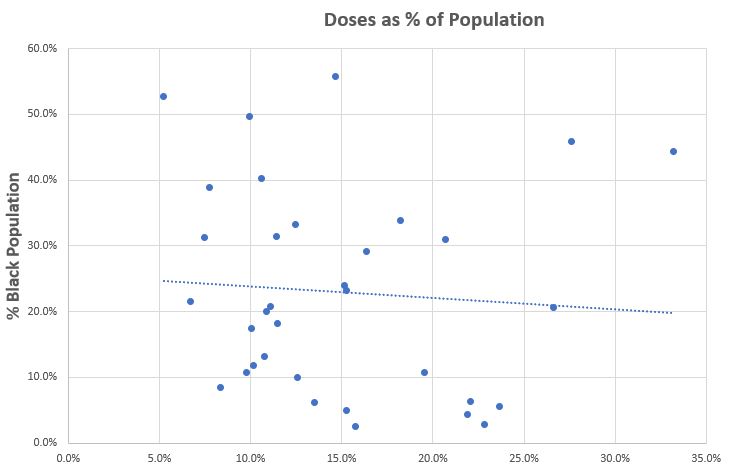 Some health districts with large percentage of African-Americans — Hampton (52.7%), Western Tidewater (38.9%) and Crater (49.7%) have had few doses delivered to them. The scatter graph shows almost zero correlation between the two variables. Indeed, the trend line is slightly negative, although the slope is too small to be meaningful. Based on this data, I concluded that racial considerations did not play a factor in the vaccine distribution. Hypothesis falsified.

In search of another hypothesis, I began wondering if vaccine distribution was  correlated with the presence of hospitals. At one point, I recalled, hospitals had administered more than half of all vaccines in the state. Norfolk was home to Sentara’s flagship hospital, while Richmond was the location of Virginia Commonwealth University health system. Perhaps that explained why those two health districts had received so many vaccines.

That’s how far I had progressed when the Duhaney memo and the VDH response arrived in my inbox this morning. VDH’s response to Tower supported the conjecture that the presence of hospitals in health district was a key variable explaining the uneven geographic distribution.

As it turns out, if the metric is the percentage of the population that has received a vaccine, Virginia Beach fares second best among the core jurisdictions of the Hampton Roads metropolitan area. While Norfolk was credited statistically speaking with receiving the most vaccines, Sentara had no problem actually delivering doses throughout its healthcare system, including Virginia Beach.

(I could not find the figures for Poquoson.)

The Northam administration bungled the early phases of the vaccine rollout, but seemingly has made up for lost time. Moreover, it has begun delivering fewer vaccines to hospitals and more to local health districts. I expect that the Virginia Beach health district numbers will start reflecting that change soon. Not that it really matters. Ultimately, it is less important where the state “delivers” the vaccines than where the doses end up being shot into peoples’ arms.

Virginia Beach officials should be reassured that their citizens have not been short-changed. I would suggest the city manager focus on a new potential bottleneck. The VDH has taken over the registration of individuals signing up for the vaccine. Governor Northam has promised the delivery of a statewide website to accomplish that goal. So far, there still is no website. For the time being, the Virginia Beach health district website says individuals should “pre-register” at a new online portal beginning Jan. 25.

Meanwhile, first-dose vaccines are being delivered directly to health districts across the state, including Virginia Beach’s. (Hospitals are still getting second doses.) What happens locally if the vaccines are arriving but people can’t register to schedule an appointment? If I were a local official, that’s the question I would be asking.