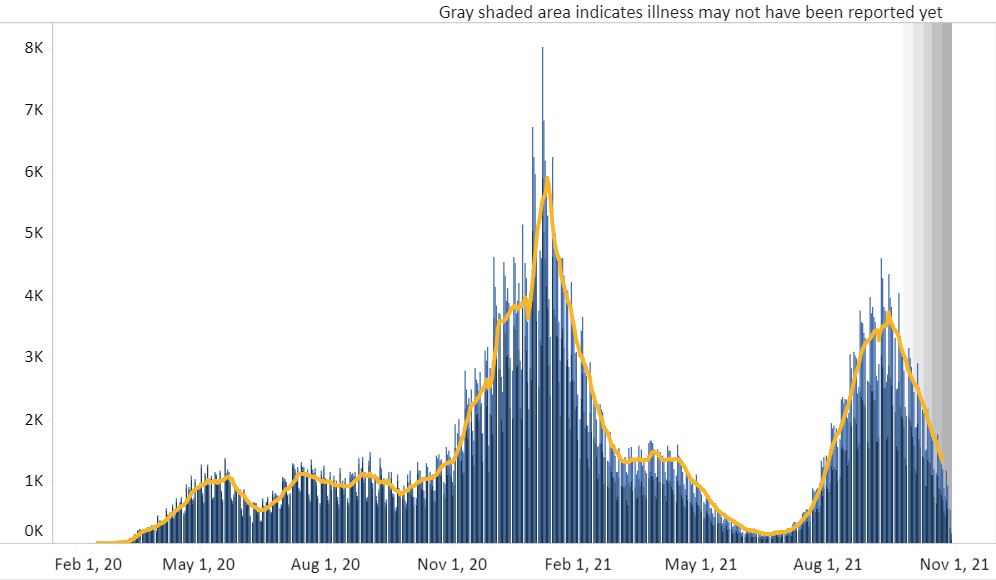 Confirmed COVID-19 cases, just one of many COVID data points tracked by the Virginia Department of Health. Good news: The virus is receding!

There’s a common saying in the business world: You manage what you measure. In Virginia, as in the rest of the United States, we have a super-abundance of data about COVID-19. Just visit the VDH website for a taste.

As we have frequently observed on this blog — and we’re hardly alone in doing so — the lockdowns imposed in an effort to contain the virus have negative effects, the most visible of which is increasing peoples’ sense of social isolation. The effects are measured in a variety of ways, from counting drug overdoses to suicides, but the data is not updated daily. Indeed, the numbers are typically released quarterly or annually after lengthy reporting delays, if they are compiled at all. For all practical purposes, that data is invisible and, therefore, plays almost no role in formulating policy.

Patrick Wilson with the Richmond Times-Dispatch (yes, I have to give the RTD credit for still doing some good reporting) tells the story of Michael McDermott, who supplies information about drug overdoses in the website FAVOR (Faces and Voices of Recovery in Virginia). He updates a chart showing the monthly EMS response data for overdoses in Virginia, using data collected by the Virginia Department of Health.

As Wilson summarizes, “the trends showed overdoses going up between 2017 and 2020 — evidence, McDermott says, that what the state’s doing to combat substance use isn’t working.”

Here’s the kicker: McDermott said he hasn’t been able to get the same data this year.

He said he spent months going back and forth on the phone and email with the Office of Emergency Medical Services, where the associate director eventually told him they’d get him the 2021 data by Sept. 30. When that date passed, McDermott was so frustrated that he filed a petition in court in Goochland County, where he lives, asking a judge to order the agency to turn over the data under the Virginia Freedom of Information Act.

At a hearing Monday in Goochland General District Court, a judge found that the agency didn’t need to turn it over because an ongoing data migration was hindering the agency’s ability to provide it.

“This data can save lives, your honor,” McDermott told Judge Claiborne H. Stokes Jr. “…This data is important to point out ways we can do a better job in the community against this epidemic of addiction.”

The state insists that it will make the data available, but perhaps not until the first of the year.

Clearly, VDH does have overdose data, but it’s not clear who, if anyone, looks at it, or whether the data percolates up through the system to the policy shop in Governor Ralph Northam’s office. Presumably, someone in the state also keeps track of suicides, another grim marker of social isolation. But suicide trend data is rarely if ever reported.

A complete COVID-19 data dashboard would contain more information than just COVID-19 confirmed cases, hospitalizations, deaths, and vaccinations. It would include data showing the fallout from epidemic-containment measures so the public could evaluate costs, benefits and tradeoffs of Virginia public health policy.

I chatted with a young woman yesterday who works as a nurse at a psychiatric hospital in the Richmond area. Admissions are through the roof. Psychiatric hospitals are running at full capacity. Obviously, mental health issues preceded the COVID-19 epidemic, but there was no question in her mind that the social isolation stemming from the epidemic was an aggravating factor. Other than Michael McDermott, no one seems to be tracking the increase in drug overdoses. As far as I can tell, no one is tracking and reporting suicides. If no one is paying attention to those numbers, they can’t be factored into COVID-related policy.