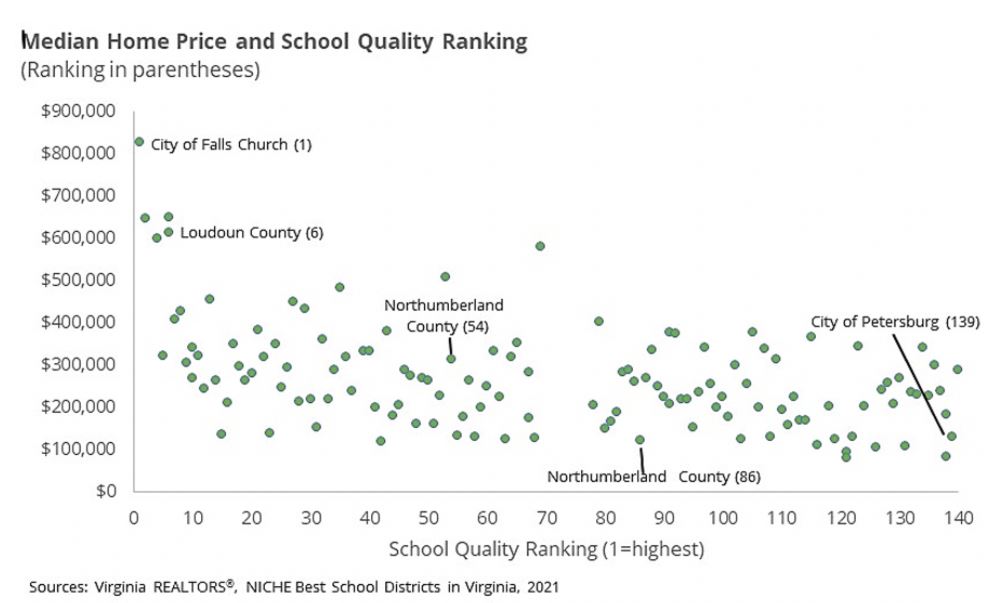 It has become commonly accepted wisdom that a leading cause of poverty  in Virginia is the phenomenon in which affluent citizens use their superior buying power to move to school districts with the highest quality schools. The poor, who have little buying power, are stuck in the worst school districts and get worse educations. Poor kids stuck in poor schools are more likely to grow up…. poor.

I am not disputing that belief, but I am subjecting it to critical scrutiny. The effect likely is real, but we don’t know if it is strong or weak.

On the one hand, there is abundant evidence that school quality and home prices are inter-related. In a recent blog post Lisa Sturtevant, chief economist for the Virginia Association of Realtors, cites a National Association of Realtors survey finding that 24% of home owners say the quality of schools was important when they were looking for a new home. The share rises to 42% for home buyers between the ages of 31 and 40. Another study has found that a five percent improvement in test scores in a school district can raise home prices by 2.5 percent. Another study concluded that homes in top-ranked school districts get more viewers and sell faster.

On the other hand, Sturtevant finds only a “slight” correlation between school quality and home prices when viewed on a district level. The scatter graph atop this post shows the correlation. Take Falls Church, Loudoun County and other Northern Virginia jurisdictions out of the equation, and there appears to be very little correlation at all.

The analysis is complicated by the fact that many of the top schools in Virginia are located in Northern Virginia, where incomes, education levels and property values are significantly higher than the Rest of Virginia.

An even bigger reservation is that the school quality rankings compare district-wide school systems, not individual schools. The home value/school quality correlation might be stronger within districts than between districts.

Also, there may be a tautology in this type of analysis. There is a tight relationship between family income, the education level of parents, and academic performance of children in school. If affluent, well-educated people move to the highest quality school districts, and their kids attend schools in that district, the kids contribute to that high quality in a self-fulfilling prophesy. All other things being equal, schools from the strongest families will have the highest school rankings based on SOL pass rates, median SAT scores, graduation rates, and the like. The “quality” metrics may or may not tell us anything about the quality of instruction at a school.

The moral of the story is not that home values don’t matter. It’s that the relationship may not be as tight as widely assumed. It is often said that “geography is destiny.” That proposition needs a lot more proof than what I’ve seen.

This entry was posted in Education (K-12), Housing and tagged James A. Bacon. Bookmark the permalink.