Hey, CDC, Admit It: Those Are Pregnant WOMEN! 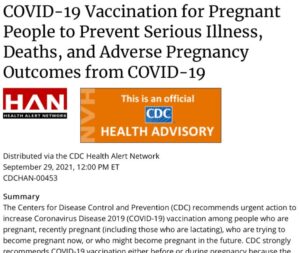 Oooops. No it’s not. What the very woke CDC did was issue a health alert pushing Covid vaccines on pregnant PEOPLE.

I read that ridiculously worded health bulletin and counted 37 references to “pregnant people” and exactly ONE mention of “women.” That must one must have gotten by the idiot editors.

Here’s a sample of the convoluted nonsense the CDC is pumping out:

Do they honestly expect pregnant women to take this advice seriously when these “experts” refuse to admit that only females give birth?

Last time I checked, a uterus is needed to become pregnant. Only women have those.

In fact, I’m a woman and I did something ONLY women can do: I gave birth to two babies.

I don’t care if biological men want to call themselves women, use feminine pronouns, slap on lipstick, take hormones or even have surgery. Live and let live.

But let’s stop pretending they can give birth. They can’t. That’s a feat for a woman.

“Pregnant people” is just another another moronic term leftists are trying to shove down our dictionaries, daring us to remind them that only women can become pregnant so they can call us transphobic.

I’m not transphobic, but I took Biology 101.

Fact is, it’s understandable that pregnant women are reluctant to take a new vaccine. After all, they’re told not to take a single aspirin, drink alcohol, eat Brie cheese, sushi or change a cat box because of dangers to themselves and their unborn babies.

If the CDC wants to convince these mothers-to-be that the vaccines are safe, it should stop playing word games and do something it doesn’t do all that well: