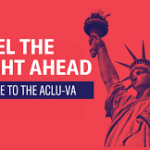 Some of us have been waiting 11 months for Virginia’s legal eagles – especially the ACLU – to bombard the courts with a blizzard of challenges to Gov. Ralph Northam’s excessive executive orders that have stomped on the constitutional rights of millions of Virginians.

Instead we mostly got crickets.

For a time, churches were closed.

Where were the lawyers?

In most places public schools are closed, despite laws that require school districts to meet the educational needs of students with disabilities, many of whom can’t learn without face-to-face instruction.

The governor has ordered Virginians to remain in their homes from midnight till 5 a.m.

The governor will not allow citizens to gather in groups larger than 10.

The governor has decided that we must surrender our alcoholic beverages at 10 p.m.

I could go on. You get my point.

We’ve been saddled with restrictions that one year ago would have been unthinkable, and yet the Old Dominion’s legal profession has been largely indifferent to blatant abuses of power. (One exception is State Sen. Chap Petersen, a Democrat, who brought legal actions on behalf of a client who was losing his wedding venue business due to Northam’s orders.)

Well, the ACLU did poke its head out of wherever it was hiding in December to demand that the governor let more criminals out of prison, lest they fall sick.

Now the ACLU has surfaced again. But not to protect the trampled rights of ordinary Virginians.

Nope. They want the fence that protects the Robert E. Lee monument in Richmond ripped down, presumably because it interferes with the rights of vandals to spray paint or even topple it.

BREAKING: We're calling for the removal of the fencing around the reclaimed Marcus-David Peters Circle.

The Lee Monument is not going away any time soon. Fencing off this public forum unnecessarily infringes on our First Amendment rights while these legal battles play out.

If only THAT were the biggest infringement on constitutional rights in Virginia.

This entry was posted in Civil Rights, Courts and law, Individual liberties and tagged Kerry Dougherty. Bookmark the permalink.