Herring Wrestles with Root Causes of Crime — and Comes up Short 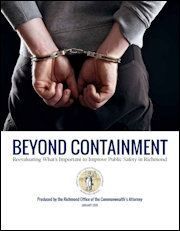 Michael Herring, who has just announced his resignation as Richmond Commonwealth Attorney to become a law partner at McGuireWoods, has been an effective prosecutor. He has worked hand-in-glove with Richmond police, and the city has one of the highest murder-clearance rates of any inner-city jurisdiction in the country. But he’s become increasingly frustrated. After a lengthy period of decline, violent crimes are on the rise again.

“We couldn’t correlate it to the drug markets in the way that we used to be able to do in the ’80s, ’90s and early 2000s.” Herring told Community Idea Stations. “We have literally used every arrow in our quiver, that is us, the police department, city hall, to try to tamp down the violence.” Even though Richmond police emphasize community policing and building trust, Herring said residents in communities most affected by the violence are less willing to cooperate. “We would go out and say to communities, if you don’t help us, we can’t prosecute the cases and prevent the crime. A pretty simply message, right? And yet, it didn’t seem to resonate.”

In his effort to understand what was happening, Herring co-researched and co-authored an inquiry into the root causes of crime. That inquiry, “Beyond Containment,” provides few answers, advocates few remedies, and is notable for its humility in purporting to understand complex reality. “Crime, like any behavior, is a complex function of individual traits and external realities,” he and co-author Iman Shabazz write. “Economic factors, housing patterns, peer culture, school experiences, family dynamics, and health issues can all contribute to criminal behavior.” Mostly, the treatise raises questions for discussion.

Representing the distilled experience of one of Virginia’s most seasoned prosecutors, the report is well worth reading. (Mercifully, it is short, clear, and free of criminologist jargon.) Sadly, however, the report employs a politically “progressive” frame of analysis and ignores insights from conservative research and theory. As such, while it does contain some fresh insights — the discussion of how social media inflames antagonisms between rival gangs is especially interesting — it largely misses the boat.

“Beyond Containment” starts with the premise that the city is over-incarcerated. “We have learned that incarceration and or conviction actually do little to deter chronic crime because neither addresses the triggers for criminal behaviors,” Herring writes.

Trauma. Research has shown that a high Adverse Childhood Experiences (ACE) score, an inventory of traumatic events in childhood, is associated with criminality. While trauma may arise from parental neglect and abuse, “entire ethnic groups or communities can have traumatic reactions to group marginalization, historical events, exposure to several violence, or even media coverage of national and historic events,” Herring writes. “Crime is not always a function of personal choice. Sometimes crime is a manifestation of a person’s effort to cope with environmental and social deficits.”

Herring poses “questions for discussion.” Among them: How has trauma shaped the lives of Richmond residents? Are there connections between historical cultural trauma experienced by certain groups? What would trauma-sensitive policing look like? “Can we reasonably expect residents not to behave violently when their neighborhoods are violent?”

Poverty. Poverty creates conditions that can make crime an attractive option: insufficient income, chronic underemployment, unstable housing, poor education, and health issues derived from stress and low self-esteem. Richmond has a 25% poverty rate, and 40% of its children are growing up in poverty. But the relationship between poverty and crime is not linear. “Crime rates remain pretty stable as a neighborhood becomes less and less affluent.” But, then, poverty can disrupt the parenting process, and when it does, “neighborhood crime will rapidly increase because of the nature of teen peer relationships.”

Health. People who show up repeatedly in criminal courts are the same people who access the emergency room for their health care needs. Lacking adequate healthcare, they often self-medicate through drugs and alcohol. Herring asks, “Does improving a person’s health reduce his or her likelihood to offend?”

Race & Identity. The population of Richmond courtrooms and detention facilities is “decidedly brown,” notes Herring, who himself is African-American. “We must reflect on whether some of our current methods for maintaining public safety evolved from laws and policies geared historically toward the suppression of certain residents.”

Herring notes the discrepancy between the percentage of blacks in the population and the incidence of crime. The population is 48% African-American, but 88% of violent offenders are black, and 77$ of victims are black. “Does the history of slavery, Jim Crow, and segregation constitute a sort of cultural trauma internalized by our Black residents?”

Housing. Herring draws attention to the correlation between concentrated poverty and crime. Less than 5% of the city’s population live in the city’s six public housing projects, yet 15% of the city’s violent crime occurred in those areas. “We are especially concerned about the young men whose pride seems to hang on defending and avenging these ‘street’ or neighborhood identities rather than building on strong family or school connections,” he writes. He points to a decision to disband one of Richmond’s most notorious projects, Blackwell, and move residents to mixed-income neighborhoods. “Is mixed-income housing the answer? Or did we simply displace the poverty and crime to an area where we can’t see it?”

Education & Youth Programs. Most crimes are committed by men under 35, a third of violent crime  by school-aged teens. Richmond school teachers and administrators say there are “insufficient resources” to serve the students’ many needs. Increasingly, students “must navigate environmental trauma in their neighborhoods and behavioral distractions during the school day.” Herring sees the “after-school window” of time as especially problematic. “We wonder whether a dollar spent on after-school activities yields a greater return than a dollar on traditional law enforcement.”

Social Media & Culture. Technology seems to exacerbate crime in a way that has yet to be studied, Herring writes. “Gone are the days when it took days or weeks for inflammatory remarks to reach a rival in another neighborhood. Instead, the response time is instantaneous. Disputes remain active, carried on via text message, snapchat, or other platforms, and often in public (at least virtually). … We want to know more about crime in the age of technology, and whether we need to respond with new tactics.”

Law Enforcement. Herring’s main concern here is what police officers can do to break down barriers and rebuild trust with the inner-city population. Here, he does not take “progressive” dogma for granted. Rather, he raises questions that we should all be asking.

Should police officers be “tough on crime” and target even minor offenses to make a community safer? Should prosecutors push for harsh sentences and as many convictions or guilty pleas as possible? Advocates argue that stuff sentencing seems to improve public safety. But critics respond that the long-term effects of high rates of arrest and conviction damages families and communities, causing more harm than they prevent. Perhaps treatment, intervention, and alternative programs that reduce convictions and rehabilitate offenders would be a better approach. These programs are expensive but nothing is as expensive as incarceration.

Bacon’s bottom line. Here’s what “Beyond Incarceration” ignores or under-emphasizes: the rise of illegitimacy and the breakdown of family structure; the prevalence of substance abuse; the increase in child neglect & abuse, and the infliction of childhood trauma; the “broken windows” effect in which ignoring small crimes fosters a sense of permissiveness and disorder in public spaces; the erosion of order and discipline within schools; and the spreading conviction, aided and abetted by social justice warriors, that law enforcement is racist and illegitimate.

There is not the slightest hint in “Beyond Incarceration” that criminal behavior in African-American communities was much lower during the Jim Crow era than it is today, and it did not explode until the 1960s, after Civil Rights had been won and the War on Poverty commenced. One would never imagine that many of the laws resulting in mass incarceration were enacted with broad support in black communities as a reaction to drug epidemics that were tearing those communities apart. I would urge Herring to consider that the reason why inner-city residents are less cooperative with police than a few years ago is that the “social justice” movement has done such a thorough job of blaming racism for all social ills and de-legitimizing law enforcement — a pattern that has been replicated in black-majority city after black-majority city across the country and almost nowhere else.

I do believe that Virginia may be over-incarcerated, especially for victimless crimes such as marijuana possession. Putting young men in jail and prison does make it harder for them to become husbands and fathers. Aspects of the criminal justice system do need reform, and as a society, we could do more to promote rehabilitation. But I would argue that no substance abuser or criminal ever straightened himself out by blaming racism. People turn around their lives only by accepting responsibility for their own lives.

I wish Herring had expressed that fundamental truth.