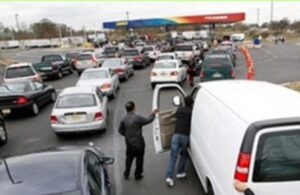 Attorney General Mark Herring has filed a lawsuit against the owners of a Springfield gas station for charging “unconscionable” prices for gasoline after the temporary shutdown of the Colonial Pipeline in May.

“Bad actors will take advantage of times of crises to unreasonably increase prices for necessary goods, like gasoline,” said Herring in a press release. “During a disaster or crisis, Virginians should never have to worry about whether they are paying a fair price for something they truly need.”

That’s one way of looking at Herring’s action. Here’s another way: he is persecuting a minority-owned small business enterprise in order to score a talking point in his re-election campaign.

Here follow the facts. You decide which interpretation is more plausible.

In early May, Tahir and Sons LLC charged an average daily price of about $2.99 per gallon for regular unleaded fuel, according to the lawsuit filed in Fairfax County Circuit Court. When the Colonial Pipeline shut down May 11, cutting supplies to East Coast gas stations by almost half, Tahir and Sons responded by raising the price of gasoline to $3.63 per gallon. As the perception of crisis intensified, Tahir bumped up the price to as high as $3.99 per gallon around the morning of May 13 — an increase of 33.4% over the price prevailing only a few days before.

The lawsuit claims that the price increases did not reflect any increased costs incurred by the business in connection with the sale of gasoline. The Virginia Post-Disaster Anti-Price Gouging Act prohibits businesses from charging “unconscionable” prices during a disaster. The lawsuit requests Tahir and Sons to award restitution to affected consumer victims.

Unconscionable. What makes a price “unconscionable”? According to state law, a price is unconscionable when it “grossly” exceeds the price charged for the same or similar goods during the 10 days prior to the disaster. What is the definition of “grossly”? Does 33.4% meet the threshold? Or are “grossly” and “unconscionable” in the eye of the beholder?

I’ll tell you what’s “unconscionable” — it was the consumer response to the gasoline shortage. Motorists began topping off their gas tanks, thereby aggravating the shortages. Sure, by raising the price, Tahir and Sons undoubtedly boosted their profit margin for a few days. But their action also likely dampened the topping-off behavior, thereby conserving gasoline supplies for people whose gas tanks were getting low and really needed it. Motorists wound up paying about $1.00 per gallon more than they had been before. Assuming that the average refill was about 10 gallons, the typical driver might have paid $10 extra. Did that impose a cruel hardship on anyone? I don’t think so.

Restitution. So, Herring wants Tahir and Sons to pay restitution to the motorists the company allegedly ripped off. And how is that to be accomplished? Is Tahir supposed to track them down — presumably through their credit cards — and issue refunds? Will anyone notice or care if they get the money? Will this legal action rectify a genuine wrong inflicted upon anyone?

Racism. Herring has whole-heartedly endorsed the critique of Virginia as a systemically racist society and routinely talks about the threat of white supremacy and white extremism. I cannot avoid noticing that Tamir and Sons is a minority-owned enterprise. Virtually no information about the company is available on the Internet, but the State Corporation Commission records indicate that the company was founded in 2016 by Tahir Mahmood. Tahir and Mahmood are common names in the Middle East and much of the Muslim world, so it is not unreasonable to assume — subject to verification — that Mr. Mahmood is Muslim. There is a good chance that he is an immigrant. If one were an adherent of Critical Race Theory, one might argue that Herring is imposing his white conception of “fairness” upon someone from a different cultural background.

Since Governor Ralph Northam declared the COVID-19 state of emergency, the Attorney General’s Office has received more than 500 complaints and emails alleging price gouging and has sent more than 150 investigative letters to businesses. Further investigation showed that many price increases occurred up the supply chain with manufacturers or distributors beyond the reach of the state’s price gouging law. According to the press release, that finding prompted Herring to extend the law to those downstream businesses.

At the time, Herring was responding to news of price hikes on goods like cleaning supplies, hand sanitizer, or even PPE (personal protection equipment). As with gasoline during the Colonial Pipeline disruption, when people perceived a shortage, they began hoarding. The anti-social effect of their actions was to make it difficult for people who needed toilet paper, hand sanitizer, whatever, to find it.

Perhaps readers have noticed that those items are no longer in short supply. Higher prices on goods experiencing shortages have two beneficial effects. First, they create a negative incentive to hoard. Second, they create a positive incentive to boost supply. The country is now awash in hand sanitizer, masks and toilet paper. Prices have fallen. Why? Because price signals work.

Herring and the authors of anti-price gouging legislation are economic illiterates. They do more harm than good. The lawsuit against Tahir and Sons is an unwarranted abuse of power.

This entry was posted in Business and Economy, Consumer protection and tagged James A. Bacon. Bookmark the permalink.