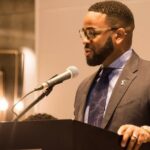 The Associated Press snagged an interview with Devon Henry, owner of NAH, LLC, the shell company that was awarded a $1.8 million contract to remove Richmond’s Civil War statues earlier this year. That contract, awarded by Richmond Mayor Levar Stoney after bypassing normal procurement protocols, is now under investigation.

The AP story provides insight into why Henry, a 43-year-old African-American construction contractor who has done more than $100 million in business with the federal government, hid his identity by setting up a shell corporation.

Henry huddled with his family to make sure everyone was on board. His son and daughter “started Googling” and “there was most definitely a level of concern” when they read about what happened in Charlottesville (where plans to remove a Robert E. Lee statue sparked a deadly white supremacist rally in 2017) and New Orleans (where a contractor’s car was firebombed).

Ultimately, they all agreed to take the job. This was an opportunity to be a part of history.

For safety, he said, he sought to conceal his company’s identity, creating a shell entity, NAH LLC, through which the $1.8 million contract was funneled.

Although the article alluded to the $4,000 Henry had donated to Stoney’s campaign and PAC, it apparently did not occur to the writer to ask Henry about his relationship with the mayor or whether his personal connections helped him get the contract. But the story does unwittingly raise new questions.

Henry told the AP that he was approached in mid-June by the city’s Department of Public Works (DPW) if he would be interested in the statue contract. A contractor who had turned the city down gave them his name, he said.

However, that account is hard to square with the Department’s response to a Freedom of Information Act request filed by the same state employee, who has asked not to be named for fear of retaliation. (This is the same employee who uncovered the documents that revealed Henry’s identity and were published by Bacon’s Rebellion.) After requesting DPW documents relating to the contract, the employee got this response: “The Department of Public Works is not the custodian of any of the documents you are requesting.”

That response suggests that someone — either Henry or the Department of Public Workers — is being less than fully candid.

In the interview, Henry said that he has received “death threats.” He has added extra cameras to his home and office, gotten a concealed carry permit, taken defensive shooting classes, and now carries a weapon wherever he goes, he told the AP.

It’s a sad commentary on our time when cowards hide behind the anonymity of the Internet indulge in such disgraceful and unforgivable threats. Moreover, while it is entirely legitimate to question whether Henry was justified in charging $1.8 million for the job — he says security concerns drove up the cost — the real onus is on Stoney for accepting bypassing procurement rules to accept the contract.

Henry went on to tell the AP that he has faced business repercussions from his role in removing the statues. “Some subcontractors have declined to work with him, he said, or doubled their prices,” the story stated.

Well, there’s more to the story than that. I have talked to a former employee of Henry’s company, Team Henry Enterprises, who said that the company experienced a cash crunch after incurring some significant overruns in a contract to repave the runway at the Fort Belvoir airfield in Alexandria. According to my source, Team Henry either slow-paid or was unable to pay several sub-contractors on subsequent jobs.

This account was confirmed by at least one comment posted about Team Henry on Google. A Certain William Murrell wrote:

Sham company taking advantage of Federal set-asides to get contracting work. They seem to take pride in not paying their debts to subcontractors with a flippant “what are you going to do about it?” attitude, despite contracts being in place. And that’s only if you manage to get someone on the phone which is all but impossible. You *may* get paid, but only through litigation.

Problems with subcontractors preceded the Confederate statue contract. I did not publish this information until now because I did not want to be perceived as “piling on” Henry when Stoney’s actions were the real issue. But now that Henry has raised the matter, I think it’s fair to tell the full story.

Henry saw his opportunity, and he took it. There’s nothing illegal about that. Hopefully, the investigation, led by the Staunton’s commonwealth attorney, will gain access to all relevant documents and settle definitively the question of whether Stoney’s actions were appropriate under the circumstances.

This entry was posted in Scandals and tagged James A. Bacon. Bookmark the permalink.