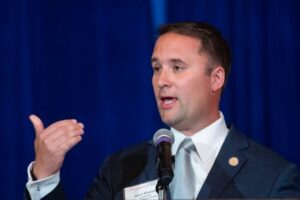 Word has made it to the Loudoun County Public Schools Board that the new Attorney General is coming to investigate.

Something about the handling by the administration of rapes in two different schools by the same male student. And not properly reporting the first one.

Seems that not only responsible leadership and common sense but also Title IX were violated.

Attorney General Miyares’ footsteps have gotten loud enough that LCPS has offered a human sacrifice to appease him.

A spokesperson for LCPS has announced that its chief of staff, Mark Smith ,who was, unfortunately, also its former Title IX Coordinator, has left that post. He literally has been cancelled.

Dr. Smith’s page on the LCPS website is blank. That was done on Friday at 5:14 PM. Of a three-day weekend.

That should do it. Nothing left to see here.