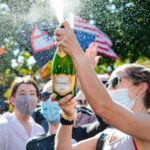 I tend to be cynical, but still I dismissed the folks who predicted that once Joe Biden was elected, the lockdowns and shutdowns that had crushed the American economy would start to fall away.

“Just wait till after the election,” they warned.

You’re insane, I thought. I believed — still do — that the Biden administration would pressure governors to close it all down, then, as the vaccine was widely distributed and warmer weather arrived, the new president could claim victory over the pandemic.

Maybe I was wrong. Look at what’s happened in just the past week even as COVID infections grow in many places, including Virginia.

Gov. Ralph Northam, the man who once outlawed sitting on the beach or playing loud music in the sand as bizarre COVID-curbing measures, and the first governor in the country to shutter schools for the entire 2020 school year, now says it’s imperative schools reopen because our kids are turning into dunces.

“Children are hurting right now; families are hurting; we hear it every day,” he said. “Test results are going down. …. We all need to collectively get our children back into school and that’s where they need to be for a lot of different reasons.”

You don’t say, Governor. Who could have predicted such a thing?

Kids have fallen so far behind, Northam said yesterday, that they may have to go to year-round calendar to let them catch up.

Great. That’ll do wonders for tourism in Virginia Beach.

Northam is not operating on new information. Last June 5th The Wall Street Journal pronounced virtual learning a disaster. And there was ample information available even then that kids were neither getting sick from COVID nor were they spreading it.

But the lockdown lobby relentlessly trotted out the specter of school children bringing home the virus to their parents and grandparents or giving it to their teachers. In the process, they managed to brainwash a sizable chunk of the population into some kind of voodoo view of COVID that was not based in science.

“Our schools are safe,” Northam declared yesterday afternoon. “The emphasis will change; instead of ‘schools should be closed,’ we’re going to approach it from the starting point of ‘schools need to be opened and here are the ways to do it safely,” said Northam.

Good luck undoing all the damage you did, Governor, with your hasty shutdowns. Now you have a political problem because you’ll have to battle with your biggest supporters: Virginia’s teachers. Their unions and associations have been drinking the COVID Kool-Aid for months. Good luck getting them to hustle back into the classrooms just because you pronounced them safe.

Over in Chicago, Mayor Lori Lightfoot who shut down her city, including hair stylists while sneaking out for a haircut herself, discovered this week that restaurants tend to go out of business when they’re closed. Oh, and that outdoor dining is a tad impractical in the Windy City in January.

On top of that, CDC contract tracing shows few infections originate in restaurants, according to CBS.

day said Chicago restaurants and bars need to be allowed to reopen “as quickly as possible” not just to help those businesses survive, but also to cut down on instances of private parties where people don’t take proper precautions against COVID-19.

Under the state’s virus mitigation plan, Chicago’s restaurants and bars were forced to halt indoor service in late October.

But the mayor said the ban on indoor dining and bar service has resulted in people engaging in risky behavior in private, holding underground parties at hotels, businesses, and elsewhere, without wearing masks or keeping a safe distance from other people to limit the spread of the virus.

She said reopening bars and restaurants would give people somewhere to go unwind where business owners can enforce the proper precautions.

Even Andrew Cuomo, responsible for the deaths of thousands of New York nursing home residents with his moronic executive order that forced long-term care facilities to accept Covid-positive patients, is now calling for New York to reopen.

As part of his annual State of the State address, Cuomo raised eyebrows on Monday for denouncing the economic restrictions that his own administration put into place in response to the coronavirus outbreak, reported Fox News.

“We simply cannot stay closed until the vaccine hits critical mass,” Cuomo said. “The cost is too high. We will have nothing left to open. We must reopen the economy, but we must do it smartly and safely.”

Shoot, it looks like the media, which rarely questioned the effectiveness of the draconian measures taken by government officials, is now reporting on studies that show lockdowns were worthless. Usually these reports go unreported.

In a piece headlined, “Covid Lockdowns Have No Clear Benefit Versus Other Voluntary Measures International Study Shows,” Newsweek reported yesterday that Stanford University researchers compared outcomes around the world and found that lockdowns made no difference in the spread of the virus.

Geez, just days before Biden takes office, some government officials and even the press are beginning to admit that shutdowns don’t work.

Coincidence? We report, you decide.