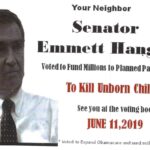 The message is clear, the messenger not on this flyer attacking Emmett Hanger during the primary. There was a logo on the other side, but no disclaimer. Click for larger view.

This is the simple stuff, people.  Delegate Nick Freitas doesn’t seem to be the only person in the Republican camp complaining that the rules are a problem, at least when enforced.  A conservative activist group that went after state Senator Emmett Hanger in the June primary is now screaming “bloody murder” because Hanger filed a complaint with the Board of Elections over some handouts that lacked the state’s required disclaimer statements.  It is a simple rule we’ve all worked with for decades, and the penalty is a civil fine that might get up to $2,500, but probably won’t go near that high.  Yet here is the heated rhetoric being spouted, with a heavy push for funds: “This is nothing less than an elected official attempting to squash free speech and shut down our grassroots PAC. We will fight this effort for it endangers all voters of Virginia for the benefit of the political class.”  No, it’s just the rules. You already have a formal PAC, so you know about the rules.  By filing a complaint Hanger gave you the spotlight again for ten seconds, but that was his choice.

If you thought $20 for an LED bulb is nuts…Sarah Vogelsong over at Virginia Mercury (we shared a row at an SCC hearing Wednesday) has this story about how forest conservation groups in Virginia are being paid for the CO2 being absorbed by their trees.  Pay a carbon credit to a Virginia conservation group and your plant can pump out more carbon in the LA basin!  Without doubt 1) Californians can be talked into anything, simply anything, with the right green pitch, 2) this is truly a religion with Virginia reaping the indulgence payments for forgiveness of sins and 3) these people are not really serious about removing CO2 from the atmosphere if they think this does any good.

The trees not cut in Virginia for the lumber industry are simply cut somewhere else, the economic concept of “leakage,” which is well described in this UC Berkley policy brief linked by Vogelsong.  Berkeley gets it!  Even more detail and some indication of the money trading hands can be found in this info the University of Tennessee provides to landowners:  $3,200 gross revenue for 200 acres of pine, but there’s an inventory fee, verification fee, trading fee…It is totally similar to how indulgence revenue got parsed by popes, bishops and parishes.  Where’s our Martin Luther?

This one looks like a win for Dominion, not consumers (no surprise.)  The State Corporation Commission recently approved (here) Dominion Virginia Energy’s request to create a new rate adjustment clause (Rider E) for environmental compliance expenses, adding about $2 to monthly residential bills.  The news coverage and SCC news release focused on the $18 million in expenses on two Chesterfield County coal generators, now closed, that the SCC told the utility to eat.  But the Attorney General’s Office had challenged far more of the $300 million in expenses than just those, without success.  The SCC staff had pushed hard for the commission to make a major change to how such costs are allocated between residential, commercial and large industrial customers.  That would have implications for many future rate discussions and the Commission declined but left that question open for the future.  For background, here’s a previous Bacon’s Rebellion piece on Rider E.  Now that it is established, its annual review and true-up will start with a new filing in February 2020.  That is when the real cost of coal ash remediation may start to appear and Rider E may start to swell.

This entry was posted in Energy, Environment, Politics and tagged Stephen D. Haner. Bookmark the permalink.