Gunning for the Founding Fathers 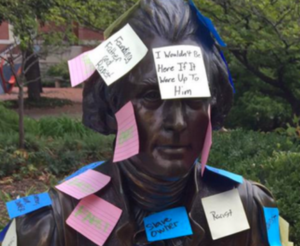 Thomas Jefferson statue at the College of William & Mary. At least they used sticky notes, not spray paint. — JAB

What happens after all of the Confederate monuments and statues have been toppled and hidden from view? After they’ve been tossed on the slagheap of history?

The Founding Fathers will be next.

Rewriting history, holding revered figures in American history to impossible 21st-century standards and attacking the very underpinnings of our republic began a while ago and is accelerating in the current climate of blind rage.

Remember the 2019 controversy over a mural at George Washington High School in San Francisco? There, a massive 1,600-square-foot painting with 13 panels called “Life of Washington” depicted George Washington’s estate and showed toiling slaves and a Native American on the ground, apparently dead.

Ironically, the artist, muralist Victor Arnautoff, was a naturalized American born in Russia, who reportedly focused his 1936 art work on the enslaved people, rather than Washington, to highlight the cruel economic system that enabled the first president to become a wealthy man.

That history lesson was lost on the cretins who wanted the mural painted over. In fact, the school board voted unanimously to paint over the Depression-era work of art. Ultimately, there was a compromise and school officials merely covered it, lest high school kids cast their eyes on an unpleasant slice of American history.

George Washington High School alum Danny Glover argued against the move saying it amounted to a form of book burning.

He was exactly right. And that was just the first volley.

The modern book burners are still at it, using the current unrest to thrash American history and reduce the Founding Fathers to nothing more than stump-headed slave owners.

For instance, a new online petition wants James Madison University in Harrisonburg renamed because our 4th president was a slave owner.

“Demand we stop the whitewashing of our history. Call on JMU to change its name!” reads the change.org petition initiated by students that had garnered almost 1,400 signatures last night.

Wait a minute. Who exactly is whitewashing history? The petition people, of course.

Never mind that Madison is often called the Father of the Constitution and was undoubtedly the driving force behind the Bill of Rights, which, ironically protects the free speech rights of disgruntled people like the ones behind the preposterous petition.

Silly as it is, the petition may be successful. In the current climate, anything is possible.

Thomas Jefferson is a popular target for radical revisionists. Last week protesters in Birmingham, Alabama set fire to a statue of the third president.

And at a rally in Charlottesville Sunday where demonstrators demanded the removal of Confederate statues, University of Virginia faculty member Larycia Hawkins told the crowd that Jefferson’s statue should be removed from the grounds, according to an account in The Cavalier Daily.

During her remarks, Hawkins said Confederate monuments in Charlottesville were not the only statues that needed to be removed, gesturing towards the Thomas Jefferson statue in the middle of the crowd…

“Speaking of statues we have to tear down, how about that one right there?” Hawkins said.

Seems to me that anyone who finds Thomas Jefferson repugnant might refrain from teaching at the very institution he founded.

Jefferson is also under attack at the University of Missouri where his statue on campus has become the target of yet another petition for removal.

“Mizzou has no room for a racist slave owner on our campus, in the Quad, where thousands of black students pass by everyday, forced to deal with imagery of the past in the future where we should be promoting equality, diversity and inclusion,” the petition reads. “A memorial of a racist has no place on [our] campus.”

At George Washington University in DC, a bust of the Father of our Nation – at a school named for him – was toppled by vandals last week.

In 2017, bowing to political correctness, Alexandria’s Christ Church removed 150-year-old plaques from the sanctuary that proudly proclaimed that George Washington and Robert E. Lee once worshiped there.

OK, perhaps the removal of Lee could be justified. But Washington? Why wouldn’t we want to remind folks that Washington believed in a higher power and often prayed in that holy place?

The Founding Fathers were not perfect men. They were human, like the presidents and the civil rights leaders who came after them.

The fact that some were slaveholders doesn’t diminish the breathtaking genius of their vision for this republic in the New World.

Instead of tearing down their statues and sullying their names, we should work together to finish what these great men began. We should expand upon their notions of freedom and equality to include all Americans – black and white, men and women – instead of attempting to eradicate them.

Of course, to do that would require thoughtfulness, calm and intelligence. All three are in short supply in the tsunami of anger that’s engulfing the nation.