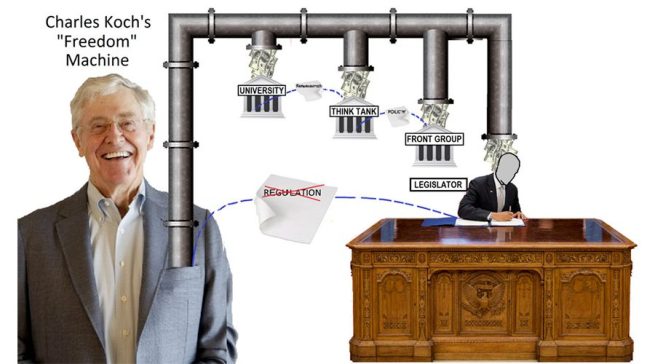 Republished with permission from VoxFairfax.com.

There are several cognitive cautions that may sensitize a reader’s appreciation of important information. Among these is the elegant French caution that the more things change, the more they remain the same. Another is the guide that instructs the reader on the behaviors of public figures to “watch what they do, not what they say.” VoxFairfax, on several occasions, has favored Rule #37 from the TV series NCIS, where investigative instincts are cautioned that “there are no coincidences.”

In a swift set of moves, Virginia’s new attorney general terminated the employment of two institutional lawyers in the state’s higher education system. One at George Mason University (GMU) served there for two decades. And that action is the moment when the bell of all three cautions rang.

The GMU vacancy was quickly filled by an experienced attorney from the institution’s legal staff. The individual is the spouse of a well-connected GOP fundraiser who also served as an executive with Koch organizations, a longtime and highly criticized donor to GMU. The Koch companies contributed $50,000 to Youngkin’s inauguration and $10,000 to his campaign.

“There are no coincidences.”

The Koch influence at GMU has swirled and roiled for several years, particularly energized by a grassroots student group UnKochmycampus (www.UnKochmycampus.org) in opposition to Koch influence in curricula and faculty appointments. Both elements are core to traditional academic freedom in higher education. A spokesman for GMU sought to comfort critics with a “more things change” press release that it’s common for incoming attorneys general to name counsel that fits their “philosophy and legal approach,” a theme initiated by the AG’s office.

The opposition to Koch influence at GMU had resulted in several minor procedural and policy changes regarding large gifts for academic purposes. Skeptics believe that this new appointment, friendly to the Kochs, is likely to stifle any further reforms. That reservation is tangentially inferred and reinforced by the $23 million donated by Koch in 2019. It is comforting that there are those who are watching what they do and not simply accepting what they say. Of course, such reservations contribute to exciting Rule #37 that there are no coincidences.

According to publicly available material, the VA AG has the authority to appoint all university counsels across the Commonwealth. No commentary could be identified questioning this authority, especially as a compromise of academic freedom.

Thus, the public is left with the words of the spokesman that such a practice is “common” to ensure these officers in higher education express views consistent with the “philosophy and legal approach” of state elected officials. It is the extent of that “fit” that rings the bell of Rule #37. For example, the AG concurrently had issued a legal opinion that no colleges or universities in Virginia have the authority to require vaccine mandates for in-person classroom settings.

Academic freedom, often related to the First Amendment, has enjoyed a long and hallowed regard within American culture. At times, it has encompassed unpopular freedoms such as governmental requirements of loyalty oaths. In 1957 (Sweezy v. New Hampshire), SCOTUS reversed the conviction of a Marxist economist who had refused to answer questions by the state attorney general concerning material he presented in a lecture. In a concurrence, Justice Felix Frankfurter further defined the protection as one covering who may teach, what may be taught, how it shall be taught, and who may be admitted to study. In Virginia, however, Frankfurter’s broad reading is clearly contradicted by the state AG’s decision regarding vaccine mandates and whose philosophy and legal approach is expressed in behalf of the institutions.

It is generally, but not universally, accepted that, by extension, academic freedom applies to the institutions themselves as essential and indispensable to the functioning of the enterprise. The authority of the Commonwealth’s AG to appoint higher education counsel is, therefore, a questionable practice that structurally grafts political influence over its colleges and universities, opening the potential for mischief and agendas that may conflict with a transcendent educational value.

Although more things may have changed at GMU, it may be that political objectives require that they remain the same. The vigilance of watchers is vital to ensure that change and reforms in the public interest continue without blind reliance upon the words of elected officials. When those words are cloaked with “common” as rationale, the bell of skepticism chimes “no coincidence!”

This entry was posted in Education (higher ed), Governance and tagged Guest contributors. Bookmark the permalink.