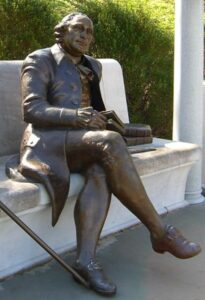 George Mason University could start giving give minorities illegal racial preference in hiring until its mostly white faculty has the same racial balance as its more heavily non-white student body, which is more ethnically diverse than the average college.

Under GMU’s draft “ARIE Task Force Recommendations,” GMU will “recruit, hire, and retain faculty” and “staff to reflect” its “student population.” It will fund “diversity cluster hire initiatives” and mandate “search plans” and “diversity of applicant pool[s]” to eliminate “gaps” between “the demographic diversity” of its faculty and its student body.

That would be against the law. Institutions are not supposed to use race in hiring or promotions, to make their staff reflect the racial composition of the population they serve. For example, a federal appeals court ruled that a city could not consider race in promotions to make its police department better reflect “the racial composition of the city” or “remedy racial imbalances in the police department.” That violated the Constitution’s Fourteenth Amendment. (See Police Association of New Orleans v. City of New Orleans, 100 F.3d 1159, 1169 (5th Cir. 1996)).

The Supreme Court ruled that schools cannot make employment decisions based on race, in order to provide minority students with “role models” of their own race. (See Wygant v. Jackson Board of Education (1986)).

Employers usually cannot discriminate based on race — even against white people. The Supreme Court ruled that firing white employees based on their race violated two federal laws, in its decision in McDonald v. Santa Fe Trail Transportation Co. (1976).

There are exceptions. Companies can give minorities a racial preference to fix what the Supreme Court calls a “manifest racial imbalance” in “traditionally segregated job categories.” (See United Steelworkers v. Weber (1979)).

True, GMU’s faculty is whiter than its student body, or the unskilled labor force in its region. But that’s irrelevant, and doesn’t mean GMU has a “racial imbalance” in the legal sense. Whether a racial imbalance exists is legally determined by comparing the demographics of GMU’s workforce to the “relevant qualified area labor pool,” which only includes those people “actually qualified for the position.” (See Janowiak v. South Bend (1984)). As the Supreme Court has explained, “the comparison should be with those in the labor force who possess the relevant qualifications.” (See Johnson v. Transportation Agency (1987)).

So, if there aren’t many blacks with PhDs, it’s not a “racial imbalance” for GMU not to have lots of black faculty. In more than a dozen academic fields, “not a single black student earned a doctoral degree in 2017,” notes The Atlantic. The fact that GMU’s faculty is 8% black is not a sign of discrimination against black people.

For skilled positions like college faculty, it is not enough to show that blacks are underrepresented compared to “general population statistics.” (See Janowiak v. South Bend (1984)).

Moreover, before an institution can give minorities a racial preference, there must be not just a “racial imbalance” but a “manifest” and “conspicuous” one. For example, the Supreme Court found a manifest racial imbalance where “only 1.83% (5 out of 273) of the skilled craftworkers at” a steel plant “were black, even though the work force in the Gramercy area was approximately 39% black.” (United Steelworkers v. Weber (1979)).

GMU, by contrast, already has more minority faculty than most colleges. This is true regardless of whether it is compared to the national average, or the state average. US News ranks GMU as a national, rather than regional school. But GMU also has a far more diverse faculty than regionally ranked schools in Virginia, like James Madison University, whose faculty is 85% non-Hispanic white.

In addition to the fact that GMU has no “manifest racial imbalance” that would justify using race in hiring or promotions, its faculty positions are not “traditionally segregated job categories” that can be targeted toward minorities.

“Traditionally segregated job categories” are jobs from which minorities have been systematically excluded in the relatively recent past. In its Weber decision, the Supreme Court treated steel craftworkers as a “traditionally segregated” job, “because blacks had long been excluded from craft unions,” including in the prior decade. Similarly, in its Johnson decision, the Supreme Court cited the fact that “women had not traditionally been employed in [the] positions” for which affirmative action was being used. By contrast, minorities have been employed in college faculties for many years, including at GMU. For example, the black economist Walter Williams was a professor at GMU for over 40 years.

GMU cannot use race in faculty hiring or promotions in the name of “diversity,” either. Under the Constitution, diversity is not a valid reason for using race in employment, according to some federal appeals courts. (See Lutheran Church–Missouri Synod v. FCC (1998)). Moreover, GMU is already “diverse,” in the sense used by the courts, which consider a 34% non-white faculty like GMU’s to be “diverse.” A court found that a 20% non-white student population was diverse enough that racial preferences were not needed. (See Wessmann v. Gittens (1998)).

GMU’s faculty hiring also must comply with Title VII of the Civil Rights Act. Title VII’s ban on racial discrimination does not contain a “diversity” exception. An appeals court ruled it violated the Title VII for a school to consider employees’ race in employment decisions in order to achieve “diversity.” (See Taxman v. Board of Education (1996)).