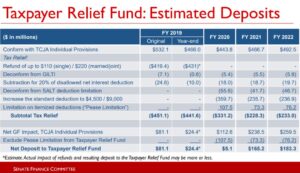 Look what they did here! This Senate Finance Committee slide from November shows only “conformity windfall” revenue from individual provisions, but then deducts individual and corporate tax relief against those totals to shrink the size of the Taxpayer Relief Fund, source of future tax reform. That’s not what the General Assembly ordered. How much corporate “conformity windfall” is missing from the top line of this chart?

Sometimes you have to start the victory lap, even if you only get halfway around the track. A year ago, on Bacon’s Rebellion and in Thomas Jefferson Institute for Public Policy organs, I was beating the drum for a proposal to double the state’s standard deduction, the amount of family income exempt from income tax.

When the smoke cleared, the legislature had made a start, increasing the standard deduction for a married couple from the ridiculously greedy (on the Tax Man’s part) $6,000 to a slightly less ludicrous $9,000. This at a time when the federal standard deduction was going to $24,000, meaning the state taxes Virginia middle-income families more far heavily than Uncle Sam.

To add insult to injury, the legislature delayed the impact of the change until the 2019 tax year, even though it could easily have made it effective for the 2018 tax year that was settled with last spring’s returns and refunds. But the good new is that the change, now in effect, will save Virginians $360 million this year and $236 million on next year’s taxes. Here is what I wrote about it Thursday for the Jefferson Institute.

The legislature agreed to one other major provision proposed by the Jefferson Institute, creating a Taxpayer Relief Fund to hold in abeyance any and all “windfall” revenue not returned by the changes made in that 2019 bill. Remember that as you read on, it is key. The state may be playing a deceptive game which I just figured out and explain below.

Nobody else was talking about the standard deduction before the issue was first raised here, and a number of legislators – including the Democrat who will now chair the House Finance Committee – reported they had seen the Jefferson Institute proposal. Saving taxpayers $600 million over two years is certainly not a bad outcome. And if lightning can strike once….

This all came about because Virginia was going to capture a major revenue windfall by conforming to new federal rules on taxes, while continuing to use Virginia’s existing tax rates and silly standard deduction amount. Other states had used that opportunity as a time to raise their standard deductions, which helps all taxpayers going that route but helps the lower income taxpayers proportionally more.

According to a Senate Finance Committee report on November 21, which provided the tax savings estimates, the state now predicts that “conformity” produces a smaller windfall than first expected. A summer of 2018 estimate put the first three years (Tax Years 2018, 2019 and 2020) of revenue windfall at almost $1.9 billion. That included growth in both personal and corporate income taxes.

But the Senate Finance Committee estimate ignored (totally) the corporate income tax windfall and mentioned only individual income taxes, setting the expected take at less than $1.4 billion for those same three years. It also claimed that all but $195 million of that was being given back by the larger standard deduction and other tax rule changes.

Here’s what just struck me: What the Senate Finance Committee slide shows is the state is deducting two corporate tax changes from the individual income tax windfall, thereby shrinking the Taxpayer Relief Fund. It shows zero revenue from higher corporate collections, but that’s wrong. This is nothing short of sleight of hand. The individual changes should be deducted from the individual windfall, and the corporate changes from any corporate windfall. But as predicted here first, the state really doesn’t want to part with this money at all.

If you look at that 2018 report, the real growth expected was in corporate income taxes. We at the Thomas Jefferson Institute proposed dealing with that with a corporate tax rate cut. According to many legislators, no corporate income tax paying company endorsed that. Fine. Every single dime of that should now be diverted to individual income tax cuts instead. Under the law as I read it, even the corporate income tax “windfall” belongs in the Taxpayer Relief Fund.

Your correspondent, the former chief lobbyist for the Virginia Chamber of Commerce and the state’s largest industry, hereby recommends that the “windfall” millions the corporations don’t want back should go to the people (who are their customers and employees after all.)

Even ignoring the corporate tax windfall, which may be substantial, and even after the accounting legerdemain, the Taxpayer Relief Fund is expected to hold $378 million after the first four years of “conformity,” according to Senate Finance accounting. That is a good basis for additional tax reform. The first recommendation would be to further increase the standard deduction, looking to get closer and closer to the federal level (already matched by many surrounding states.) A second idea, also from last year’s bill, is to index all tax provisions for inflation.

Step one will be to see what the Governor proposes on December 17, and then to see what the General Assembly disposes over the winter. It could abolish the Taxpayer Relief Fund and absorb the revenue. It could ignore and keep all the corporate income tax growth.

One step it might take is to follow the path initially proposed by Governor Ralph Northam, to make the existing Earned Income Tax Credit a “refundable” credit, meaning some of the low-income recipients would actually get checks from the state if their credit exceeded their tax liability. The policy goal is commendable, but the method inferior to a major increase in the standard deduction. That shows up immediately as more money in every paycheck.