From Moon Walking to Slow Walking 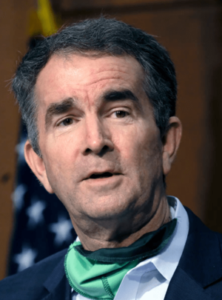 I’m tired of writing about Gov. Ralph Northam. I wish he’d stop doing dumb things so we could all go back to ignoring him.

But here we go again. This time it’s another Northam bait-and-switch.

What is it with this governor? He claims to worship at the altar of science and numbers but becomes an apostate when the facts don’t suit his agenda.

Shortly before his Tuesday press conference Northam excitedly Tweeted: “Tune in now – I’m giving an update on #Covid-19 in Virginia and making an important announcement.”

I knew the big announcement wouldn’t be that Northam was looking at our collapsing COVID numbers and was ready to loosen his stranglehold on the commonwealth. That’s not his style. Gullible Virginians may have been tricked into watching, however.

Northam spent about THREE minutes at his presser discussing the biggest issue facing the state: The drawn-out Covid shutdowns that are crushing our economy, forcing businesses into bankruptcy and causing hundreds of thousands of Virginians to lose their jobs.

“Our total case numbers have been trending downward,” Northam admitted with the somberness he reserves for good news. “The number of hospital beds occupied by COVID patients is trending down, as is the number of patients hospitalized with a positive or a pending COVID test.”

He said the percent of positive tests dropped to 7.4%.

These were the precise metrics that he’d promised would move the commonwealth into the next phase of reopening.

“All of these numbers look positive, but I want to be clear about a couple of things,” Northam said. “We will not be moving into phase 3 this week. On Thursday, we will have more to say about what phase 3 would look like.”

Oh, and guess how many minutes he spent talking about the nursing home carnage which had one of its ugliest days Monday?

Zero. Unless I missed something.

Yet surely he, too, saw the sickening numbers: 18 Virginians dead of COVID on Monday, 17 of them were in nursing homes. That’s 94% for those keeping score at home.

Instead of explaining how he was going to stop the deaths, Northam sprinted to his happy news.

The governor wants to declare June 19th — “Juneteenth” — a holiday. It commemorates the day in 1865 when Union soldiers landed in Texas with belated news of Emancipation. A day worth celebrating because it marks the official end of slavery in America.

This week’s holiday will be celebrated only by executive branch workers but the governor plans to ask the General Assembly to make it a permanent holiday for all state workers.

He left out one important detail, of course: How he plans to pay for this after wrecking the economy with his lockdown.

Northam is not only a man with poor judgment — his blackface caper, his recent pandemic promenade on the boardwalk — but an unserious governor who’s easily distracted by shiny objects, such as superstar Pharrell Williams who joined him at his presser to make the announcement about the new holiday.

We all love Pharrell. He’s a favorite son in Virginia Beach. Best of all, he brought the “Something In The Water” festival to the Resort City last year, turning a problematical weekend for his hometown into an explosion of music and good vibes.

We are forever grateful. Many of us can’t wait for next April’s SITW festival. Unless Northam still has the state on lockdown, that is.

Since Northam seems incapable of multitasking, he ought to be reopening the commonwealth, not hobnobbing with celebrities. We all know why Northam spent his press conference the way he did. He’s still trying to atone for slapping a blackface/Klan picture in his medical school yearbook in 1984. That appalling photo has never been explained.

Nevertheless, declaring a Juneteenth holiday is a fine idea. We like holidays and need more of them.

Someone tell the governor that a new holiday will mean much more when people are actually back on the job.

This entry was posted in Health Care, Politics and tagged COVID-19, Kerry Dougherty. Bookmark the permalink.

21 responses to “From Moon Walking to Slow Walking”