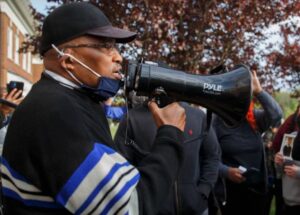 Back in April, Isiah Brown made a 911 call to the Spotsylvania County Sheriff’s Office concerning a domestic dispute. Brown told the dispatcher that he was going to kill his brother but also said he was unarmed. When a deputy arrived, Brown was walking down the street away from his house with an object in his hand. According to body-cam footage, the deputy yelled at Brown to “show me your hands” and to “drop the gun.” He then shot Brown seven times. As it turned out, the object was not a gun but a cordless house phone.

Brown survived the shooting but was hospitalized and has undergone multiple surgeries. A special prosecutor has been assigned to the case, which is still under investigation.

The incident has done more than open up the divide between Black Lives Matter and defenders of the police, it has revealed a divide in the African-American community.

Moe Petway, president of the Spotsylvania Branch of the NAACP, jumped on the case. The NAACP negotiated the release of the video and 911 recording of the shooting and pressed for the investigation and special prosecutor. He has established a working relationship with local law enforcement authorities, he says, that allows the NAACP to accomplish things that street protests cannot.

“Change comes about by collaborating, working with people and trying to get things done,” Petway told the Fredericksburg Free Lance-Star. “Sometimes it may appear that you’re not as forceful as other people would like, but we’ve learned throughout time that we’ve got to negotiate and work things out.”

But the mostly younger followers of the BLM movement don’t have much patience with such an attitude.

“How are we as a community to feel safe with you coming up here and coercing with the same people who are oppressing us?” Japharii Jones with Black Lives Matter 757 asked Petway in an April demonstration outside the sheriff’s office. “How does it play in our favor for them to come out here and pass the mic and you to shuck and jive and move your feet in their direction and we’re out here suffering?”

The Free Lance-Star does a good job of exploring divisions within Fredericksburg’s African-American community over how to handle tragic incidents such as the Isiah Brown shooting. African-Americans are no more a monolithic in their thinking than whites or any other ethnic group.