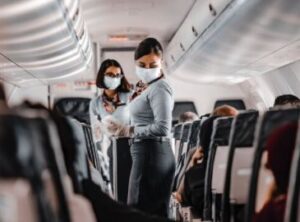 Ever since the onset of the Covid-19 pandemic I’ve been wondering what it would take for Americans to finally say they’d had enough.

Enough of absurd and ineffective regulations imposed on them by leaders hiding behind claims that they were simply “following the science.”

I was furious early in the spring of 2020, when Virginia’s governor — who was “following the science” — forbade SITTING ON THE BEACH. Remember that slice of crazy? It was OK to walk, run or fish on the beach, but no sitting.

That was followed by even more “follow the science “ idiocy: no football or volleyball on beaches. No loud music. No umbrellas. The constant wiping down of handrails to the beach with disinfectant, even though we knew the virus couldn’t survive in summer heat and direct sunlight.

Then came football season, and the governor ordered “crowds” at outdoor events be limited to 250 spectators, regardless of the size of the venue.

Hey, he was just following the science.

Next came curfews and restrictions on alcohol sales. One moronic, ineffective rule after another. All imposed on ordinary decent Virginians by a power-drunk governor who claimed to be following the science but who was clearly making it up as he went along.

It was the same around the country. Worse in places like New York, California and Michigan with governors even more terrible than ours, better in places like Florida, Texas and Tennessee with less imperious executives.

The White House did its part, too — including during the Trump administration — ordering lockdowns and masks on air and train travel.

On Monday, we may have hit the tipping point when a young mother and her 2-year-old asthmatic son were tossed from American Airlines flight 1284 from Dallas to Colorado Springs because the toddler couldn’t breathe and kept pulling his mask off.

Did I mention the tot was TWO YEARS OLD?

The grotesque event was captured on video.

A two-year-old and mother were allegedly hurled off AA Flight 1284 on Monday, as the child was having an asthma attack and removed his mask. pic.twitter.com/htP9noFOvY

Amanda Pendarvis said she worried her that her son — who, like other asthmatics, struggles for every breath — might not keep a mask on his face.

As a precaution, she claims she had him tested for COVID before the flight and presented the negative test to the flight crew before taking her seat.

Her son immediately began crying, hyperventilating, slashing with his little hands at the mask that was making it even more difficult to breathe.

A flight attendant made an announcement that take-off was being delayed by an “noncompliant passenger.” Next, the aircraft returned to the gate and the mother and child were escorted off the plane.

American Airlines confirmed that the family was removed for a mask violation, but denied that they knew about the child’s asthma.

Oh please. That shouldn’t even matter. The baby was TWO.

Look, no one on that aircraft was in any danger from that tot. This is just one more ugly example of an arbitrary rule intended to browbeat the youngest members of the public into obedience. Frankly, this case borders on child abuse.

Social media is littered with similar accounts of toddlers refusing to wear masks that ended with surly flight attendants barking orders at frazzled parents before ejecting them.

According to MarketWatch, “The president and co-founder of the consumer advocacy group Travelers Unite, Charles Leocha, told Business Insider: ‘Airlines that insist on having 2- and 3-year-old children wear masks at all times will always face problems. Treating a 2-year-old like a 30-year-old is foolish and unnatural’.”

Masking 2-year-olds is following the science? I don’t think so. Why not just let this mother soothe her baby and get him to calm down, maskless for the flight? When did we get to be such heartless, unthinking rule followers?

When George Floyd was killed by Minneapolis Police Officer Derek Chauvin last year it was heartbreaking to hear him cry over and over, “I I can’t breathe.”

Likewise, the sight of a baby, gasping for breath while his frantic mother tries to cover his face with a mask ought to offend even the most fearful-mandate-loving American.

Frankly, if we’ve learned anything in the past 18 months, it’s that the most terrifying three words in the English language are “follow the science.”